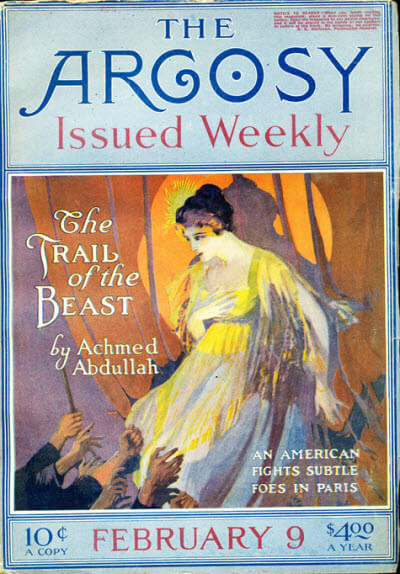 Achmed Abdullah (1881 - 1945) was an American short story author, novelist, and screenwriter who claimed to be a descendant of the Russian imperial family, but this remained unconfirmed. His country of origin is also unclear; perhaps he was born in Afghanistan, with Arab and Tartar ancestors. He received an international education in India, England, France, and Germany and became an expert linguist. After his mother poisoned his father, Abdullah was sent to Eton College at Oxford University at age twelve, received his Bachelor of Letters at the Sorbonne in Paris, then went on to serve for seventeen years in the British-Indian and Ottoman armies, attaining the rank of acting Colonel. He migrated to New York City, where he became a writer, playwright, and screenwriter until his death in 1945.

Abdullah wrote pulp crime, mystery, and adventure stories with multicultural themes, including a progressive Siamese drama, Chang: A Drama of the Wilderness, a film nominated for an Academy Award in 1927. His first published story was Strength of the Little Thin Thread (1912), followed by The Red Stain (1915). His work is frequently published in anthologies, including A Simple Act of Piety, Bucking the Tiger (1917), The Trail of the Beast (1918), and The Incubus (1920), a weird story about a white man alone in the jungles of Africa. His novel, The Thief of Bagdad was published in 1924, but is not yet in the public domain. Indian literature fans may also enjoy reading the Hindu Tales from the Sanskrit, edited by Nancy Bell, and short stories by Rabindranath Tagore and Rudyard Kipling.

As unusual as his eclectic global experiences, Abdullah was born and died on the same date, May 12th.