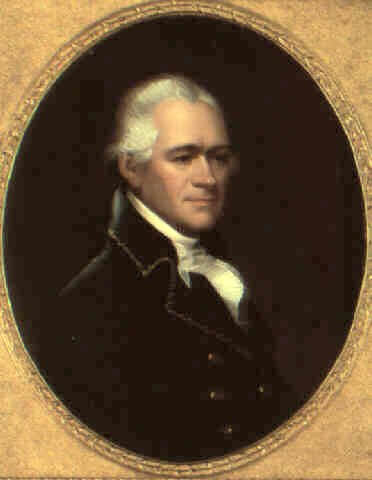 Alexander Hamilton (1755 or 1757-1804) was perhaps one of the most influential and certainly the most scandalous of the Founding Fathers-- both a thinker and a doer. He earned the confidence of George Washington as a strategic officer early in the Revolutionary War, became the first Treasury Secretary and primary architect of America's new government: creating a tax system, funded debt, budget system, central bank, customs service and a coast guard. From Ron Chernow's book, Alexander Hamilton (2004):
"[Hamilton] set a high-water mark for administrative competence that has never been equaled. If Jefferson provided the essential poetry of American political discourse, Hamilton established the prose of American statecraft...If Jefferson enunciated the more ample view of political democracy, Hamilton possessed the finer sense of economic opportunity...No other founder articulated such a clear and prescient vision of America's future political, military, and economic strength or crafted such ingenious mechanisms to bind the nation together."

Perhaps overshadowing his accomplishments, is the easier to remember drama surrounding Hamilton. He rose from an illegitimate birth on the small Caribbean island of Nevis to become the most influential person in America (second only to George Washington) between 1776 and 1800. He was one of the only founding fathers opposed to slavery, perhaps because he grew up in the often violent slave-based economy of the West Indies (Nevis' slaves outnumbered whites four to one), and saw the savage, ugly reality of slavery, rather than the rosy agrarian experiences that Jefferson's democracy espoused. Ironically, Hamilton was only able to escape to North America for formal education and introductions to New York's academic and political elites because of his benefactors and mentors who were import-export slave and sugar merchants. Hamilton had an extremely unstable upbringing, was taunted as a bastard throughout his life and lacked formal schooling, yet he enjoyed reading poetry by Alexander Pope and the French edition of Niccolo Machiavelli's The Prince. All of these factors contributed to his extreme drive to achieve and seek legitimacy from every opportunity afforded him in America.

Hamilton's influence in shaping a new country are legendary, yet he was embroiled in the country's first sex scandal, feuded passionately with Jefferson, Madison, Adams, and Burr. At the age of 49, he was on the losing end of a fatal dual with Aaron Burr. No wonder such a dramatic story, inspired by Ron Chernow's novel, yielded the most sensational Broadway musical in recent history, Hamilton!. In addition to new attention in popular culture, Hamilton's political ideology and economic sensibilities seems to align in many ways with the new Trump presidency, breathing new life in Progressive Republicanism and isolationism more than 240 years later.

Hamilton was a prolific writer; he along with James Madison and John Jay crafted The Federalist Papers (1787-1788), the country's formative document for establishing the government infrastructure.