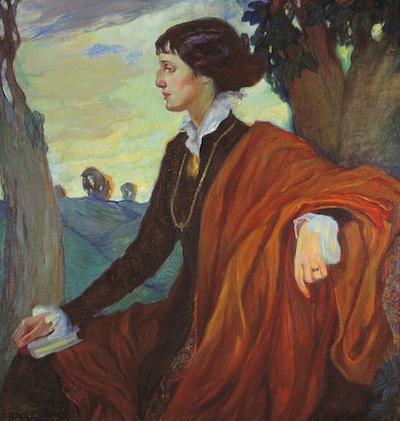 Anna Akhmatova (1889 - 1966) was a Russian modernist poet who rose to prominence and thrived during the The Silver Age of Russian Poetry.

Her early work occurred between 1912 and 1925, bounded by her 1912 publication of Evenings, her first small collection of poetry, and the 1925 execution of her husband Nikolay Gumilev at the hands of the Bolsheviks (the group that would eventually become the Communist Party of the Soviet Union).

Akhmatova never labored in obscurity. She was well known from her very first publication and demand for her work never fell out of favor with the literary public, even later in her career when her poetry was condemned, censored and suppressed by the Stalinists. Relying on an economy of words and emotional restraint, her style set her apart from her contemporaries, and she became a leading female voice in Russian literature. Her popularity set off a fleet of copy-cat female poets, causing her to quip, "I taught our women how to speak, but don't know how to make them silent." Later in life, she cast a self-critical look at the success of her early work and wondered how [some] "...naïve poems by a frivolous girl for some reason were reprinted thirteen times..."

Her work was never naïve and frivolous, but maybe certain pieces reflected the times, and it was easier to take up lighter subjects before the revolution. Here is a poem, ‘He loved three things, alive:’, from her 1912 collection Evening

He loved three things, alive:
White peacocks, songs at eve,
And antique maps of America.
Hated when children cried,
And raspberry jam with tea,
And feminine hysteria.
…And he had married me.

Akhmatova's literary output fell following her husband's 1925 execution and resumed again in the second part of her career between 1936 and her death in 1966. She bravely determined to remain in the country rather than emigrate, becoming a witness to the atrocities of the new government and suffering personally and professionally at its hands. Her son Lev was routinely arrested and imprisoned by the Stalinists, and in 1949 he was sent to Siberia for ten years. Akhmatova worked for his release. He was released in 1956 (three years after Stalin's death in March 1953), but an estrangement had crept into the relationship with Lev questioning whether or not some of the more politically provocative poems that she had begun to publish prolonged his imprisonment. In 1993 the extent of central government surveillance on Akhmatova came to light. The authorities had bugged her flat and spied upon her extensively, accumulating 900 pages of condemning material to use against her.

There is a historical lesson here for all of us, but it is particularly timely given the continuing revelations about government-sponsored surveillance here in the United States.

Akhmatova is featured in our favorite Russian Writers

8th November 1913
'A cast-iron fence,'
'A grey cloud in the sky overhead,'
'Ah! You thought I'm the kind too,'
'All I see is hilly Pavlovsk,'
'Already the maple leaves'
'Always so many pleas from a lover!'
'...And no-one came to meet me'
A Ride
'As a silver, delicate strand'
'A string of little beads at my neck,'
At Tsarskoye Selo
'Because somewhere there's simplicity and light,'
Bezhetsk
"Broad Gold, the Evening"
Confession
Dark Dream: 2
'Don't taunt your heart with earthly joys,'
'Drink my soul, as if with a straw'
'Drowsiness returns me'
'Earthly fame is smoke,'
Evening
'Evening hours at the desk,'
Evening Room
'Everything's looted, betrayed and traded,'
Flight
For Alexander Blok
For Mikhail Lozinsky
'For the last time, we met,'
'Hands clasped under the dark veil.'
'He loved three things, alive:'
'Here we're all drunkards and whores,'
'How can you bear to view the Neva,'
'How I loved, and love, to look'
'I asked the cuckoo'
'I came here, in idleness.'
'Ice, resonant, floats by,'
'I don't know if you're alive or dead -'
'I hear the oriole's ever-mournful voice,'
'I'll be there and weariness will vanish.'
'I'll erase this day from your memory,'
Imitation of Innokenty Annensky
'I'm not one of those who left their land'
'I pray to the ray from the window-pane'
'Is my destiny so changed,'
'Is this century worse than those before?'
I Taught Myself To Live Simply
'It's fine here: the rustle and crackle;'
'It was not mystery or grief,'
'I've written down the words'
'I was not born too early or too late,'
'I won't beg for your love.'
Legend on An Unfinished Portrait
'Let the organ peal out once more,'
"Like a White Stone"
'Like a white stone in a well's depths,'
'Like one betrothed I receive'
Lot's Wife
Love
'Memory of sun ebbs from the heart.'
Memory's Voice
'My heart beats smoothly, steadily,'
'My imagination, obediently,'
'My voice is weak, but not my will'
'No one sung about that meeting,'
'Now farewell, capital,'
'Now no one will listen to my songs.'
'Now the pillow's,'
'Oh, and the day was cold,'
Petrograd, 1919
Prayer
Reading Hamlet
Reply
Solitude
Song of the Last Meeting
'The bridge of logs is black and twisted,'
'The evening light is broad and yellow,'
The Guest
'The high vault is bluer'
'There I saw out'
'There's a secret border in human closeness,'
The road by the seaside garden darkens,
'The sky's blue lacquer grows dim,'
'To feel thoroughly ill, to sweat in delirium,'
'To lose the freshness of speech, the simplicity of feeling,'
Venice
'We shall not sip from the same glass,'
White Night
'Why do you wander, restless?'
'Why pretend to be'
'Yes, I loved those nocturnal gatherings - '
'You should appear less often in my dreams'