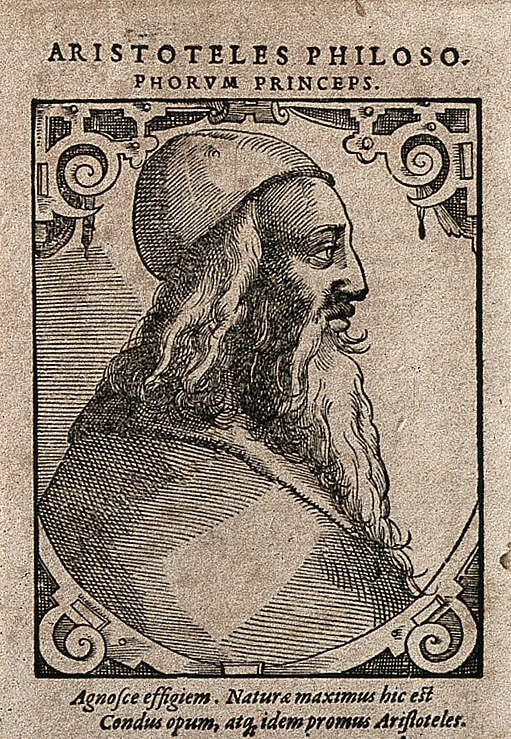 Aristotle (384 BCE - 322 BCE) was an ancient Greek philosopher and scientist, one of the prominent intellectuals of Western thought who greatly influenced or founded numerous disciplines including: logic, mathematics, physics, biology, botany, metaphysics, ethics, politics. Some may not know of his many contributions to the fields of theatre, dance, medicine and agriculture, as well. He earned the nickname "The Philosopher" given to him by Thomas Aquinas, who was responsible for adopting Aristotelian philosophy in the Christian West. Aristotle established the framework for who might be considered good, Aquinas told us why people should be good. Here's a review of the pecking order of Greek philosophers: Aristotle was a student of Plato, who studied under Socrates, and Alexander the Great was a student of Aristotle, and influenced countless philosophers and theologians to follow. [Woodcut at right by T. Stimmer, 1589]

For all of his contributions to philosophy and science, it is a shame that so many of Aristotle's works were lost over the centuries. Aristotle wrote as many as 200 treatises, of which only 31 survived. According to some sources, his enduring works were lecture notes, not of the quality of literature of his lost writings. As the father of the field of logic, he was the first to develop a formal system for reasoning, partnered with the scientific method. Aristotle relied on the structure rather than the content to validate his arguments, creating syllogisms. If the premises are true, then the conclusion is guaranteed to be true. Read more about Aristotle's philosophies and life.

Politics: A Treatise on Government
The Poetics of Aristotle