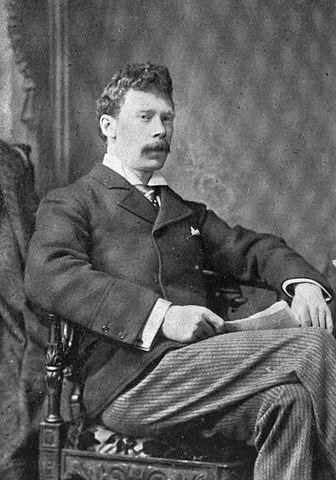 Sir Arthur Quiller-Couch (1863 - 1944) was a Cornish novelist who published under the pseudonym "Q." Though he compiled a number of anthologies of verse and prose, he is best known for The Oxford Book of English Verse (1250-1900), published in 1900, updated in 1918. He's well regarded for his own poetic verses, publishing Poems and Ballads in 1896. Though they never met, he influenced the American author Helene Hanff, who wrote one of our favorite books, 84, Charing Cross Road (1970) and its sequel, Q's Legacy (2012).

Quiller-Couch got his "Sir" title when he was appointed King Edward VII Professor of English Literature at the University of Cambridge in 1912, and he published On the Art of Writing (1916), a compendium of his inaugural lectures as the professor of English literature at Jesus College, Cambridge. He published On the Art of Reading in 1920. A collected edition of Q's fiction was published in Tales and Romances (30 volumes, 1928–29). He published a number of stories in Noughts and Crosses: Stories Studies and Sketches using his own name in 1898. Some of our favorite stories include The Omnibus (1898) and The Seventh Man (1936).

A Blue Pantomime
A Dark Mirror
A Pair of Hands
A Town's Memory
Ballast
Beside the Bee Hives
Elisha
England!
Fortunio
From A Cottage in Troy
Frozen Margit
Oceanus
Old Aeson
"Once Aboard the Lugger"
Prisoners of War
Psyche
Red Velvet
Statement of Gabriel Foot: Highwayman
Stories of Bleakirk
The Carol
The Countess of Bellarmine
The Disenchantment of 'Lizabeth
The Doctor's Foundling
The Gifts of Feodor Himkoff
The Haunted Dragoon
The Haunted Yacht
The Jew on the Moor
The Lady of the Red Admirals
The Lady of the Ship
The Magic Shadow
The Mayor of Gantick
The Mystery of Joseph Laquedem
The Omnibus
The Outlandish Ladies
The Paradise of Choice
The Penance of John Emmet
The Return of Joanna
The Room of Mirrors
The Seventh Man
The Singular Adventure of a Small Free-Trader
The Small People
The Two Householders
Widdershins
Yorkshire Dick