This story is featured in our collection of Dog Stories.

The dog is a member of society who likes to have his day's work, and who does it more conscientiously than most human beings. A dog always looks as if he ought to have a pipe in his mouth and a black bag for his lunch, and then he would go quite happily to office every day.

A dog without work is like a man without work, a nuisance to himself and everybody else. People who live about town, and keep a dog to give the children hydatids and to keep the neighbours awake at night, imagine that the animal is fulfilling his destiny. All town dogs, fancy dogs, show dogs, lap-dogs, and other dogs with no work to do, should be abolished; it is only in the country that a dog has any justification for his existence. 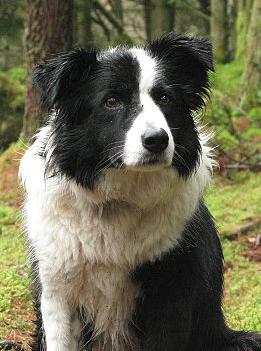 The old theory that animals have only instinct, not reason, to guide them, is knocked endways by the dog. A dog can reason as well as a human being on some subjects, and better on others, and the best reasoning dog of all is the sheep-dog. The sheep-dog is a professional artist with a pride in his business. Watch any drover's dogs bringing sheep into the yards. How thoroughly they feel their responsibility, and how very annoyed they get if a stray dog with no occupation wants them to stop and fool about! They snap at him and hurry off, as much as to say: "You go about your idleness. Don't you see this is my busy day?"

Sheep-dogs are followers of Thomas Carlyle. They hold that the only happiness for a dog in this life is to find his work and to do it. The idle, `dilettante', non-working, aristocratic dog they have no use for.

The training of a sheep-dog for his profession begins at a very early age. The first thing is to take him out with his mother and let him see her working. He blunders lightheartedly, frisking along in front of the horse, and his owner tries to ride over him, and generally succeeds. It is amusing to see how that knocks all the gas out of a puppy, and with what a humble air he falls to the rear and glues himself to the horse's heels, scarcely daring to look to the right or to the left, for fear of committing some other breach of etiquette.

He has had his first lesson -- to keep behind the horse until he is wanted. Then he watches the old slut work, and is allowed to go with her round the sheep; and if he shows any disposition to get out of hand and frolic about, the old lady will bite him sharply to prevent his interfering with her work.

By degrees, slowly, like any other professional, he learns his business. He learns to bring sheep after a horse simply at a wave of the hand; to force the mob up to a gate where they can be counted or drafted; to follow the scent of lost sheep, and to drive sheep through a town without any master, one dog going on ahead to block the sheep from turning off into by-streets while the other drives them on from the rear.

How do they learn all these things? Dogs for show work are taught painstakingly by men who are skilled in handling them; but, after all, they teach themselves more than the men teach them. It looks as if the acquired knowledge of generations were transmitted from dog to dog. The puppy, descended from a race of sheep-dogs, starts with all his faculties directed towards the working of sheep; he is half-educated as soon as he is born. He can no more help working sheep than a born musician can help being musical, or a Hebrew can help gathering in shekels. It is bred in him. If he can't get sheep to work, he will work a fowl; often and often one can see a collie pup painstakingly and carefully driving a bewildered old hen into a stable, or a stock-yard, or any other enclosed space on which he has fixed his mind. How does he learn to do that? He didn't learn it at all. The knowledge was born with him.

When the dog has been educated, or has educated himself, he enjoys his work; but very few dogs like work "in the yards". The sun is hot, the dust rises in clouds, and there is nothing to do but bark, bark, bark -- which is all very well for learners and amateurs, but is beneath the dignity of the true professional sheep-dog. When they are hoarse with barking and nearly choked with dust, the men lose their tempers and swear at them, and throw clods of earth at them, and sing out to them "Speak up, blast you!"

Then the dogs suddenly decide that they have done enough for the day. Watching their opportunity, they silently steal over the fence, and hide in any cool place they can find. After a while the men notice that hardly any are left, and operations are suspended while a great hunt is made into outlying pieces of cover, where the dogs are sure to be found lying low and looking as guilty as so many thieves. A clutch at the scruff of the neck, a kick in the ribs, and they are hauled out of hiding-places; and accompany their masters to the yard frolicking about and pretending that they are quite delighted to be going back, and only hid in those bushes out of sheer thoughtlessness. He is a champion hypocrite, is the dog.

Dogs, like horses, have very keen intuition. They know when the men around them are frightened, though they may not know the cause. In a great Queensland strike, when the shearers attacked and burnt Dagworth shed, some rifle-volleys were exchanged. The air was full of human electricity, each man giving out waves of fear and excitement. Mark now the effect it had on the dogs. They were not in the fighting; nobody fired at them, and nobody spoke to them; but every dog left his master, left the sheep, and went away to the homestead, about six miles off. There wasn't a dog about the shed next day after the fight. The noise of the rifles had not frightened them, because they were well-accustomed to that.*

* The same thing happened constantly with horses in the South African War. A loose horse would feed contentedly while our men were firing, but when our troops were being fired at the horses became uneasy, and the loose ones would trot away. The excitement of the men communicated itself to them.

Dogs have an amazing sense of responsibility. Sometimes, when there are sheep to be worked, an old slut who has young puppies may be greatly exercised in her mind whether she should go out or not. On the one hand, she does not care about leaving the puppies, on the other, she feels that she really ought to go rather than allow the sheep to be knocked about by those learners. Hesitatingly, with many a look behind her, she trots out after the horses and the other dogs. An impassioned appeal from the head boundary rider, "Go back home, will yer!" is treated with the contempt it deserves. She goes out to the yards, works, perhaps half the day, and then slips quietly under the fences and trots off home, contented.

This story is featured in our collection of Short-Short Stories and Dog Stories. If you enjoyed this story you might wish to read Paterson's take on The Cat or The Dog -- as a Sportsman.
6.6

Return to the Banjo Paterson Home Page, or . . . Read the next short story; The Dog -- as a Sportsman