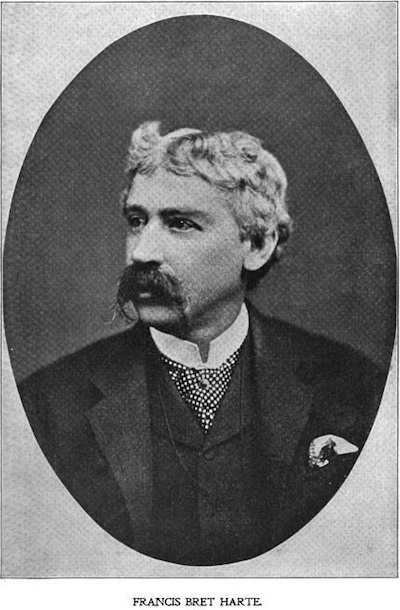 Francis Bret Harte (1836 - 1902) was an American author and poet, who worked in a number of different professional capacities including miner, teacher, messenger and journalist before turning to full time writing in 1871.

Bret Harte moved to California in 1853 and spent part of his life in a mining camp near Humboldt Bay (the current town of Arcata), a setting which provided material for some of his works. While The Luck of Roaring Camp (published in 1968) made Bret Harte famous nationwide and helped him to land a writing contract with a publisher in 1871, he faltered and was without a contract by 1872. In 1878 Bret Harte was appointed as United States Consul in Krefeld, Germany and then to Glasgow in 1880. He spent thirty years in Europe, moving to London in 1885. He died in England of throat cancer in 1902.

Bret Harte's literary output improved while he was in Europe and helped to revive his popularity. The Outcasts of Poker Flat and Tennessee's Partner join The Luck of Roaring Camp on the list of his influential works. If you enjoy Harte's works set in western mining camps, you may also enjoy stories by Mary Hallock Foote and Harriet Prescott Spofford.

A Buckeye Hollow Inheritance
A Convert of the Mission
A Drift from Redwood Camp
Adventures Of John Longbowe, Yeoman
A Knight-Errant Of The Foothills
A Lonely Ride
A Mother of Five
An Ali Baba of the Sierras
An Episode of Fiddletown
A Passage In The Life of Mr. John Oakhurst
A Romance of the Line
A Vision of the Fountain
A Ward Of Colonel Starbottle
A Widow of the Santa Ana Valley
A Yellow Dog
Barker's Luck
Bohemian Days in San Francisco
Brown of Calaveras
Bulger's Reputation
Captain Jim's Friend
Chu Chu
Colonel Starbottle for the Plaintiff
Dick Boyle's Business Card
High-Water Mark
How Reuben Allen "Saw Life" in San Francisco
How Santa Claus Came to Simpson's Bar
In the Tules
Jimmy's Big Brother from California
Lanty Foster's Mistake
Melons
Miggles
Mliss
Mr. Macglowrie's Widow
Notes by Flood and Field
Prosper's "Old Mother"
Stories Three
Tennessee's Partner
The Convalescence Of Jack Hamlin
The Devotion of Enriquez
The Heritage of Dedlow Marsh
The Idyl of Red Gulch
The Indiscretion of Elsbeth
The Luck of Roaring Camp
The Man of No Account
The Mermaid of Lighthouse Point
The Outcasts of Poker Flat
The Right Eye of the Commander
The Sheriff of Siskyou
The Stolen Cigar Case
The Youngest Miss Piper
Three Vagabonds of Trinidad
Uncle Jim and Uncle Billy
Under the Eaves