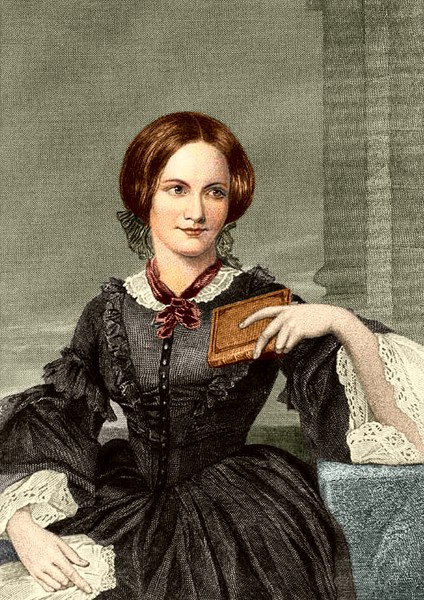 Born in 1816, the eldest and most famous of the Bronte children, Charlotte was a poet and novelist best known for her novel Jane Eyre (1847).

Charlotte went to the Clergy Daughters' School in 1824 with her three sisters, Emily, Maria and Elizabeth. She blamed the school's deplorable conditions on the deaths of her two older sisters and her own poor state of health. Charlotte used her school as the basis for the Lowood School in Jane Eyre. She served as the motherly friend to her younger sisters, encouraging their literary talents and willingness to publish their work. After withdrawing his surviving children from boarding school, their father schooled them at home, where they were confined to a quiet room most of the day, so as not to disturb their father's work. The Bronte children created their own literary fictional worlds, which inspired their respective literary careers.

Along with Emily and Anne, Charlotte co-authored a joint collection titled Poems in 1846. They chose to publish it under masculine pen names which matched their own initials (Ellis, Acton, and Currer) in hopes that their work would be better received. The Bronte sisters continued using their pen names when submitting manuscripts for several . of their later works.

Charlotte's first book was rejected, called The Professor, but the publisher asked if Currer Bell had any other manuscripts ready. Six weeks later, Bronte submitted Jane Eyre, which was published in 1847, an instant success.

Charlotte married Arthur Bell Nicholls in 1854. Sadly, Charlotte's health declined rapidly after becoming pregnant. She died with her unborn child in 1855 at the age of 38. Charlotte's book The Professor was published posthumously in 1857. See Elizabeth Gaskell's biography The Life of Charlotte Bronte (1857).

Visit our Feminist Literature Study Guide for more on Bronte and other authors in this genre.

From Retrospection
On The Death Of Anne Bronte
Pleasure
Speak of the North! A Lonely Moor
The Teacher's Monologue