When I think of writers "behaving badly" Dorothy Parker springs to mind; it's not that I think she was behaving badly at all. I think she was just doing things her way. But in the stricter, more tightly conformed society that ruled her day, she was judged by different standards and the "they" (the self-appointed morality police of her times) often found her behavior outrageous.

A member of the Algonquin Round Table Dorothy Parker (born Dorothy Rothschild, 1893 - 1967) party and caroused her way across the literary landscape. And though her writing showed talent, it was her acerbic wit and biting satire that provided attention and fame. Like many other writers, Parker had rough childhood and as an adult suffered through bouts of depression an alcholism, and survived several suicide attempts. 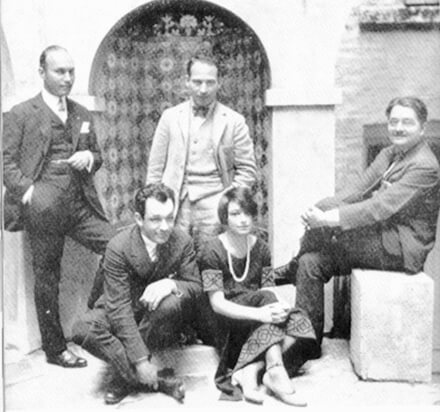 She passed away in 1967, but left us with her acerbic wit and searing writing style:

I require three things in a man: he must be handsome, ruthless, and stupid.

If you want to know what God thinks of money, just look at the people he gave it to.

I don't care what is written about me so long as it isn't true.

I hate writing, I love having written.

Brevity is the soul of lingerie.

If I didn't care for fun and such, I'd probably amount to much. But I shall stay the way I am, Because I do not give a damn.

It's a small apartment; I've barely enough room to lay my hat and a few friends.

Beauty is only skin deep, but ugly goes clean to the bone.

This is not a novel to be tossed aside lightly. It should be thrown with great force.

You can lead horticulture, but you can't make her think.

The first thing I do in the morning is brush my teeth and sharpen my tongue.

Money cannot buy health, but I'd settle for a diamond-studded wheelchair.

The two most beautiful words in the English language are 'cheque enclosed.'

A little bad taste is like a nice dash of paprika.

I shall stay the way I am because I do not give a damn.

Lips that taste of tears, they say/ Are the best for kissing.

Wit has truth in it; wisecracking is simply calisthenics with words.

Love is like quicksilver in the hand. Leave the fingers open and it stays. Clutch it, and it darts away.

Drink and dance and laugh and lie, love the reeling midnight through, for tomorrow we shall die (but alas we never do)!

That would be a good thing for them to cut on my tombstone: Wherever she went, including here, it was against her better jugment.

That woman speaks eighteen languages, and she can't say 'No' in any of them.

I'm never going to be famous. My name will never be writ large on the roster of those who-do-things. I don't do anything. Not one single thing. I used to bite my nails. But I don't even do that anymore.

Every year, back comes spring, with nasty little birds yapping their fool heads off and the ground all mucked up with plants.

Gratitude -- the meanest and most sniveling attribute in the world.

They sicken of the calm who know the storm.