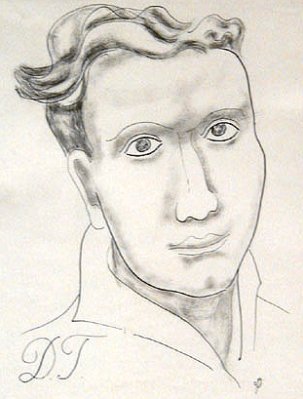 Dylan Thomas (1914 - 1953) was a Welsh poet best known for Do not go gentle into that good night and radio broadcasts reciting A Child's Christmas in Wales and Portrait of the Artist as a Young Dog (a mischievous nod to fellow Irishman, James Joyce).

Thomas began publishing as a teenager after quitting school at sixteen and briefly working as a journalist. In 1934, he first received literary acclaim for his poem, Light breaks where no sun shines, published in his collection, 18 Poems. His poetic style was greatly influence by the works of William Blake.
[Dylan sketch to the right is by Jessica Dismorr, 1935.]

Making a living as a writer proved difficult, so Thomas augmented his work as a popular radio broadcaster for the BBC, covering the literary scene. He went to America four times in the 1950s, recording a vinyl record to further popularize his iconic work, A Child's Christmas in Wales. Thomas fell into a coma during his last trip to New York City, where he died. His body was returned to his native Wales.

Thomas is considered one of the most important Welsh poets of the 20th century. We are pleased to feature his limited works available in the public domain.

A Child's Christmas in Wales