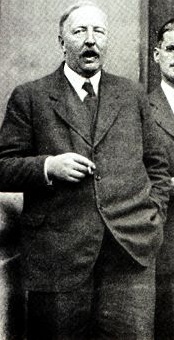 Ford Madox Ford (1873 – 1939) was an English novelist, poet, critic and publisher. He published two highly influential journals that were critical to the development of early twentieth century English literature, The English Review and The Transatlantic Review. He was born Ford Hermann Hueffer in Surrey, England but changed his name to Ford Madox Ford in 1919 after World War I.

Ford was a strong literary advocate and became friendly with many great writers of his time, helping such authors as Ernest Hemingway, James Joyce, Ezra Pound, Gertrude Stein, and Jean Rhys (with whom he would have an affair). He was the inspiration and model for Cohn's literary friend "Braddock" in Ernest Hemingway's The Sun Also Rises (1926) and in his Parisian memoir, A Moveable Feast, in which Hemingway devoted an entire chapter to an early 1920s encounter with Ford at a café in Paris.

Ford is best known for his novel, The Good Soldier (1915), the tale of two "perfect couples." Though the title suggest a classic "war story" it is actually a sad story about love and romance, somewhat autobiographical from Ford's personal experiences.

On Heaven
The Iron Music