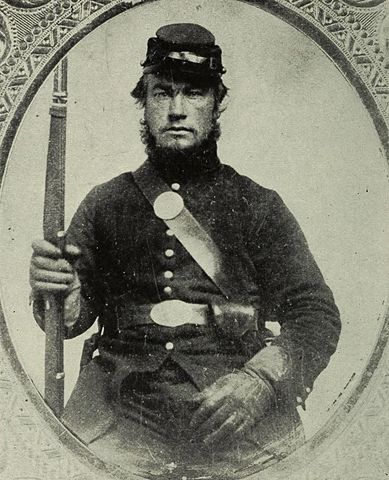 Francis De Haes Janvier (1817 - 1885) wrote American patriotic poems, best known for his prose commemorating The Sleeping Sentinel (1863), a dramatic account of the Union soldier in the 3rd Vermont Infantry, William Scott, who was sentenced to death for sleeping at his post. Both his death sentence and his pardon were read while he was facing the firing squad. No wonder the incident and Janvier's poem were adapted into a black and white movie in 1914, in which Abraham Lincoln dramatically arrives as the firing squad is taking aim to deliver his pardon in person. Scott was returned to fight, and died at the Battle of Lee's Mills.

Curiously, Janvier's poem was read anonymously to Mr. and Mrs. Lincoln at the Executive Mansion and again in the Senate chamber for a distinguished audience on January 19, 1863, and was quite a sensation. Had he been credited, Janvier's writing might have been better known. Janvier also published a collection of poems in 1860, The Skeleton Monk: And Other Poems.