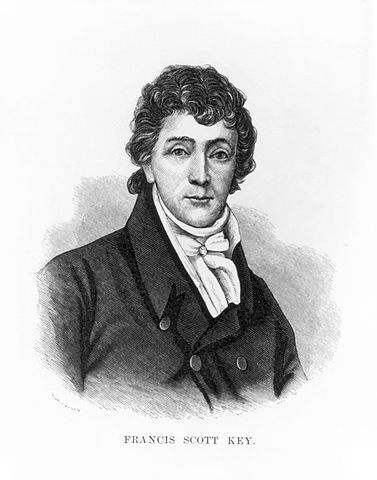 Francis Scott Key (1779 - 1843) was an American lawyer, and amateur poet, best known for writing The Star-Spangled Banner, originally titled, The Defence of Fort McHenry. John Stafford Smith composed the musical score, in what became officially recognized as the United States' national anthem, The Star-Spangled Banner. Key witnessed the day-long British attack on Fort McHenry in Baltimore, Maryland during the War of 1812. His inspiring poem was first published in 1814. It took a while to become official: The U.S. Navy adopted the anthem in 1889, President Woodrow Wilson had it recognized in 1916, but it wasn't until 1931 that the U.S. Congress declared it the country's national anthem and President Herbert Hoover signed the resolution on March 3, 1931.

Did you know that F. Scott Fitzgerald was named after his famous second cousin? Visit American History to learn about other important American historical figures and their writings.