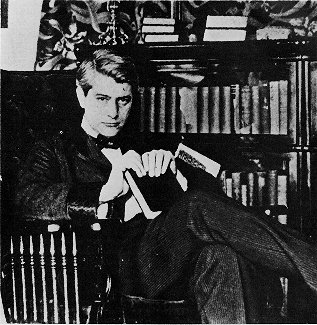 Frank Norris (1870 - 1902), born in Chicago, was an American journalist, novelist, and a leader in the Naturalist movement. He believed novels should confront morality:
"The novel with a purpose brings the tragedies and griefs of others to notice and proves that injustice, crime, and inequality do exist." -- The Novel with a Purpose, 1902

Norris moved to San Francisco, attended the University of California, where he was influenced by the French Naturalist writer, Emile Zola. Norris wrote McTeague, his most recognized work, about how man can overcome his brutish, animalistic tendencies. He was influenced by socialist/progressive author, Upton Sinclair, and defenders of evolution, particularly Thomas Henry Huxley.

Norris' work includes morally purposeful action scenes with a theme often involving suffering caused by corrupt and greedy turn-of-the-century corporate monopolies. Norris planned a trilogy, Epic of Wheat, about the production, distribution, and consumption of wheat in America. The first book, The Octopus (1901), dramatized how California farmers were controlled by the railroad industry. The second, The Pit (1903), about Chicago commodities traders, was published after Norris died in 1902. He never completed his planned third novel, The Wolf.

Norris married the novelist and short story writer, Kathleen Norris. His life was cut short following a fatal appendicitis operation at the age of 32.

McTeague: A Story of San Francisco
The Octopus