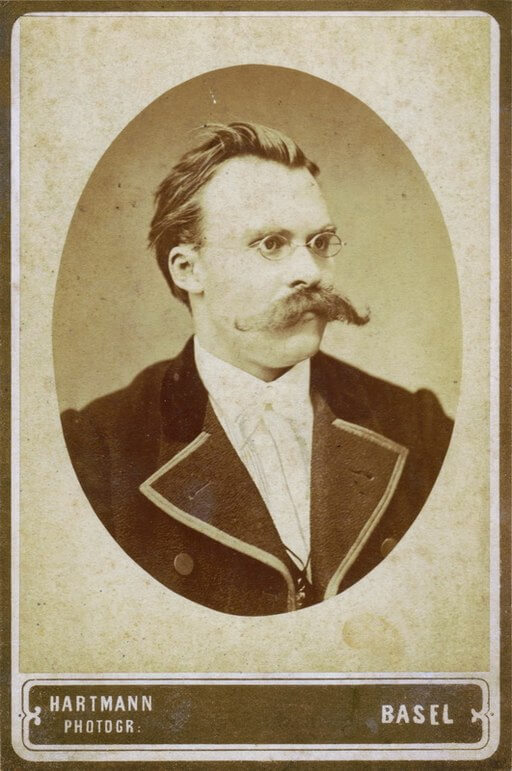 Friedrich Wilhelm Nietzsche (1844-1900) was a German philosopher, author, and scholar of Latin and Greek texts who had a profound impact on Western philosophy. In a nutshell: "That which does not kill us makes us stronger." His writings spanning art, poetry, religion, fiction and cultural criticism revealed a fondness for aphorism and irony. He practiced existentialism, German idealism, metaphysics, and believed in the creative powers of the individual to overcome competing wills. He is perhaps best known for his proclamation about the downfall of metaphysics: "God is dead."

Nietzsche's scholarship at the University of Bonn and Leipzig University led to his position as the chair of Philology at the University of Basel in 1869, at the age of 24. Sadly, his mental health deteriorated, diagnosed as tertiary syphilis, though some claimed he had a stroke leading to dementia. After his break-down in his 40s, his anarchistic philosophies became even more provocative and extreme, before his death in 1900.

Nietzsche's most studied work remains Beyond Good and Evil (1886).

"From the senses originate all trustworthiness, all good conscience, all evidence of truth."
"To live is to suffer, to survive is to find some meaning in the suffering."
"There is not enough of love and goodness in the world to throw any of it away on conceited people." [Human, All Too Human]

Beyond Good and Evil
Human, All Too Human