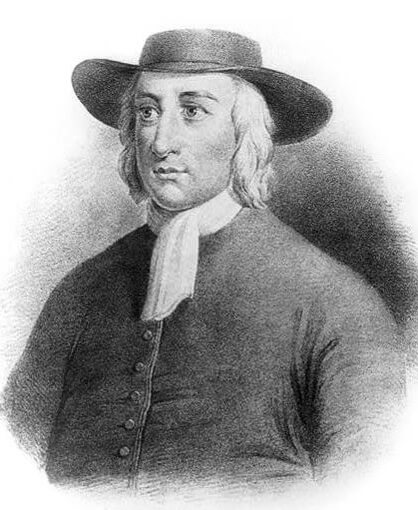 George Fox (1624 – 1691) was the founder of the Religious Society of Friends, commonly known as the Quakers or Friends. He was known as an English Dissenter, rebelling against religious and political authorities by preaching an uncompromising form of the Christian faith. He toured throughout Britain, the Netherlands, Belgium, and North America, and was imprisoned for a year.

Fox grew up in a puritan village in England and though his relatives predicted his calling as a priest, he began his career as a shoemaker's apprentice. He earned a reputation for introspection, diligence, and acquired his life-long values for living simply and abandoning luxury. He traveled near London during the time of The English Civil War (1643), suffered bouts of depression, spoke with various clergy, and began forming his distinct religious beliefs. Of the great number of Christian denominations and beliefs, he sought the "English Dissenters" to gain spiritual understanding absent from the established church. He began to preach publicly in 1647, gained a small following and formed the "Friends of the Truth" grounded in the original simplicity of Christianity, and he expected his followers to live a life without sin, as opposed to believers being sinless, which was the practice of other denominations. His intensely personal sermons denounced immorality, deceit, and church tithing. Parliamentarians were fearful that Fox's group was plotting to overthrow the government, after which he met with Oliver Cromwell to assure him no arms would be taken up, and had an intense spiritual discussion that resulted in Cromwell's sympathy. Subsequent Quakers would employ Fox's technique, which they called "speaking truth to power." Fox's legacy, in addition to his distinct religious beliefs, includes his leadership overcoming government prosecution after the Restoration. Fox published his autobiography, titled simply, Journal, in 1694 with a preface by William Penn.