Tomodata, the young samurai, owed allegiance to the Lord of Noto. He was a soldier, a courtier, and a poet. He had a sweet voice and a beautiful face, a noble form and a very winning address. He was a graceful dancer, and excelled in every manly sport. He was wealthy and generous and kind. He was beloved by rich and by poor. 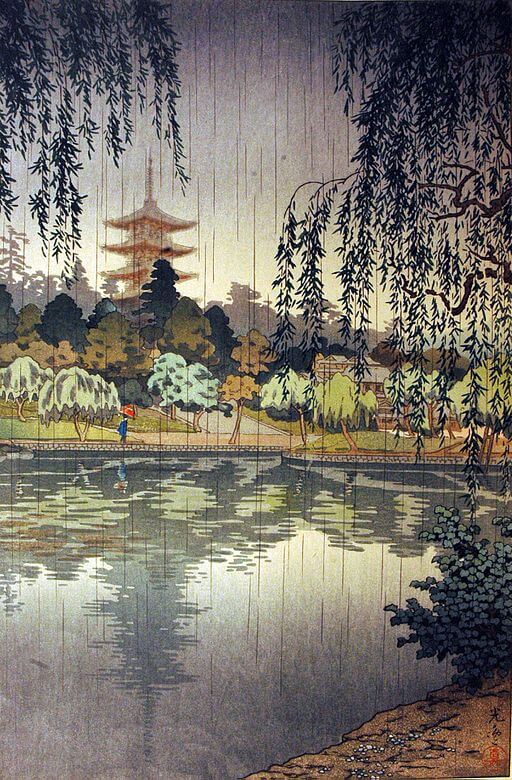 Now his daimyo, the Lord of Noto, wanted a man to undertake a mission of trust. He chose Tomodata, and called him to his presence.

“Are you loyal?” said the daimyo.

“My lord, you know it,” answered Tomodata.

“Do you love me, then?” asked the daimyo.

“Ay, my good lord,” said Tomodata, kneeling before him.

“Then carry my message,” said the daimyo. “Ride and do not spare your beast. Ride straight, and fear not the mountains nor the enemies’ country. Stay not for storm nor any other thing. Lose your life; but betray not your trust. Above all, do not look any maid between the eyes. Ride, and bring me word again quickly.”

Thus spoke the Lord of Noto.

So Tomodata got him to horse, and away he rode upon his quest. Obedient to his lord’s commands, he spared not his good beast. He rode straight, and was not afraid of the steep mountain passes nor of the enemies’ country. Ere he had been three days upon the road the autumn tempest burst, for it was the ninth month. Down poured the rain in a torrent. Tomodata bowed his head and rode on. The wind howled in the pine-tree branches. It blew a typhoon. The good horse trembled and could scarcely keep its feet, but Tomodata spoke to it and urged it on. His own cloak he drew close about him and held it so that it might not blow away, and in this wise he rode on.

The fierce storm swept away many a familiar landmark of the road, and buffeted the samurai so that he became weary almost to fainting. Noontide was as dark as twilight, twilight was as dark as night, and when night fell it was as black as the night of Yomi, where lost souls wander and cry. By this time Tomodata had lost his way in a wild, lonely place, where, as it seemed to him, no human soul inhabited. His horse could carry him no longer, and he wandered on foot through bogs and marshes, through rocky and thorny tracks, until he fell into deep despair.

“Alack!” he cried, “must I die in this wilderness and the quest of the Lord of Noto be unfulfilled?”

At this moment the great winds blew away the clouds of the sky, so that the moon shone very brightly forth, and by the sudden light Tomodata saw a little hill on his right hand. Upon the hill was a small thatched cottage, and before the cottage grew three green weeping-willow trees.

“Now, indeed, the gods be thanked!” said Tomodata, and he climbed the hill in no time. Light shone from the chinks of the cottage door, and smoke curled out of a hole in the roof. The three willow trees swayed and flung out their green streamers in the wind. Tomodata threw his horse’s rein over a branch of one of them, and called for admittance to the longed-for shelter.

At once the cottage door was opened by an old woman, very poorly but neatly clad.

“Who rides abroad upon such a night?” she asked, “and what wills he here?”

“I am a weary traveller, lost and benighted upon your lonely moor. My name is Tomodata. I am a samurai in the service of the Lord of Noto, upon whose business I ride. Show me hospitality for the love of the gods. I crave food and shelter for myself and my horse.”

As the young man stood speaking the water streamed from his garments. He reeled a little, and put out a hand to hold on by the side-post of the door.

“Come in, come in, young sir!” cried the old woman, full of pity. “Come in to the warm fire. You are very welcome. We have but coarse fare to offer, but it shall be set before you with great good-will. As to your horse, I see you have delivered him to my daughter; he is in good hands.”

At this Tomodata turned sharply round. Just behind him, in the dim light, stood a very young girl with the horse’s rein thrown over her arm. Her garments were blown about and her long loose hair streamed out upon the wind. The samurai wondered how she had come there. Then the old woman drew him into the cottage and shut the door. Before the fire sat the good man of the house, and the two old people did the very best they could for Tomodata. They gave him dry garments, comforted him with hot rice wine, and quickly prepared a good supper for him.

Presently the daughter of the house came in, and retired behind a screen to comb her hair and to dress afresh. Then she came forth to wait upon him. She wore a blue robe of homespun cotton. Her feet were bare. Her hair was not tied nor confined in any way, but lay along her smooth cheeks, and hung, straight and long and black, to her very knees. She was slender and graceful. Tomodata judged her to be about fifteen years old, and knew well that she was the fairest maiden he had ever seen.

At length she knelt at his side to pour wine into his cup. She held the wine-bottle in two hands and bent her head. Tomodata turned to look at her. When she had made an end of pouring the wine and had set down the bottle, their glances met, and Tomodata looked at her fullbetween the eyes, for he forgot altogether the warning of his daimyo, the Lord of Noto.

She answered: “They call me the Green Willow.”

“The dearest name on earth,” he said, and again he looked her between the eyes. And because he looked so long her face grew rosy red, from chin to forehead, and though she smiled her eyes filled with tears.

Ah me, for the Lord of Noto’s quest!

Then Tomodata made this little song:

And the maiden, the Green Willow, answered:

That night he lay before the fire—still, butwith wide eyes, for no sleep came to him though he was weary. He was sick for love of the Green Willow. Yet by the rules of his service he was bound in honour to think of no such thing. Moreover, he had the quest of the Lord of Noto that lay heavy on his heart, and he longed to keep truth and loyalty.

At the first peep of day he rose up. He looked upon the kind old man who had been his host, and left a purse of gold at his side as he slept. The maiden and her mother lay behind the screen.

Tomodata saddled and bridled his horse, and mounting, rode slowly away through the mist of the early morning. The storm was quite over and it was as still as Paradise. The green grass and the leaves shone with the wet. The sky was clear, and the path very bright with autumn flowers; but Tomodata was sad.

When the sunlight streamed across his saddlebow, “Ah, Green Willow, Green Willow,” he sighed; and at noontide it was “Green Willow, Green Willow”; and “Green Willow, Green Willow,” when the twilight fell. That night he lay in a deserted shrine, and the place was so holy that in spite of all he slept from midnight till the dawn. Then he rose, having it in his mind to wash himself in a cold stream that flowed near by, so as to go refreshed upon his journey; but he was stopped upon the shrine’s threshold. There lay the Green Willow, prone upon the ground. A slender thing she lay, face downwards, with her black hair flung about her. She lifted a hand and held Tomodata by the sleeve. “My lord, my lord,” she said, and fell to sobbing piteously.

He took her in his arms without a word, and soon he set her on his horse before him, and together they rode the livelong day. It was little they recked of the road they went, for all the while they looked into each other’s eyes. The heat and the cold were nothing to them. They felt not the sun nor the rain; of truth or falsehood they thought nothing at all; nor of filial piety, nor of the Lord of Noto’s quest, nor of honour nor plighted word. They knew but the one thing. Alas, for the ways of love!

At last they came to an unknown city, where they stayed. Tomodata carried gold and jewels in his girdle, so they found a house built of white wood, spread with sweet white mats. In every dim room there could be heard the sound of the garden waterfall, whilst the swallow flitted across and across the paper lattice. Here they dwelt, knowing but the one thing. Here they dwelt three years of happy days, and for Tomodata and the Green Willow the years were like garlands of sweet flowers.

In the autumn of the third year it chanced that the two of them went forth into the garden at dusk, for they had a wish to see the round moon rise; and as they watched, the Green Willow began to shake and shiver.

“My dear,” said Tomodata, “you shake and shiver; and it is no wonder, the night wind is chill. Come in.” And he put his arm around her.

At this she gave a long and pitiful cry, very loud and full of agony, and when she had uttered the cry she failed, and dropped her head upon her love’s breast.

He carried her to the stream’s side, where the iris grew like swords, and the lotus-leaves like shields, and laved her forehead with water. He said: “What is it, my dear? Look up and live.”

“The tree,” she moaned, “the tree ... they have cut down my tree. Remember the Green Willow.”

With that she slipped, as it seemed, from his arms to his feet; and he, casting himself upon the ground, found only silken garments, bright coloured, warm and sweet, and straw sandals, scarlet-thonged.

In after years, when Tomodata was a holy man, he travelled from shrine to shrine, painfully upon his feet, and acquired much merit.

Once, at nightfall, he found himself upon a lonely moor. On his right hand he beheld a little hill, and on it the sad ruins of a poor thatched cottage. The door swung to and fro with broken latch and creaking hinge. Before it stood three old stumps of willow trees that had long since been cut down. Tomodata stood for a long time still and silent. Then he sang gently to himself:

“Ah, foolish song! The gods forgive me.... I should have recited the Holy Sutra for the Dead,” said Tomodata.

You may enjoy our Fairy Tales Guide, offering story recommendations for all ages.

Return to the Grace James Home Page, or . . . Read the next fairy tale; Hana-Saka-JiJi