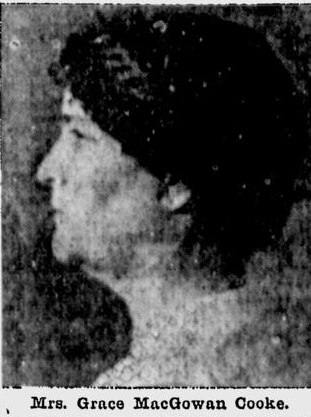 They leaned towards each other like young saplings weakened at the root.

He who has lived close to the earth and her creatures has learned wisdom.

--Excerpted from Return: A Story of the Sea Islands in 1739

Grace MacGowan Cooke was an American author. She and her sister Alice MacGowan, usually worked collaboratively and the pair published about thirty novels, a hundred short stories and some poetry.

The father was a well-known captain during the Civil War and became the editor of the Chattanooga Times. Their father supplemented the girls' public school education with some home-schooling to round out their educations

The sisters and their mother moved to Carmel, California in 1908 where they were part of an artist community.

Cooke's themes included the struggles of Appalachian women working in the mills at the turn of the twentieth century. Her well regarded novels include The Power and the Glory (1910) and Girls of Silver Spur Ranch (1913).

The portrait of MacGowan Cooke was taken in 1910, published in a news paper series entitled "Well Known Daughters of Famous Men"

The Girls of Silver Spur Ranch
The Power and the Glory

A Call
The Capture of Andy Proudfoot