Julius Caesar (1896) is a short biography intended for children and adults alike, before you attempt William Shakespeare's The Tragedy of Julius Caesar

Nearly two thousand years ago there lived in Rome a man whose name was Julius Ceasar. He was the greatest of all the Romans. 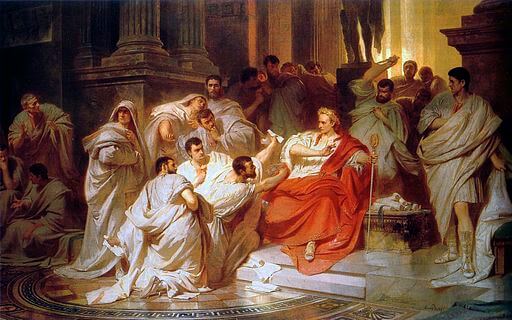 Why was he so great?

He was a brave warrior, and had conquered many countries for Rome. He was wise in planning and in doing. He knew how to make men both love and fear him.

At last he made himself the ruler of Rome. Some said that he wished to become its king. But the Romans at that time did not believe in kings.

Once when Ceasar was passing through a little country village, all the men, women, and children of the place came out to see him. There were not more than fifty of them, all together, and they were led by their may-or, who told each one what to do.

These simple people stood by the roadside and watched Ceasar pass. The may-or looked very proud and happy; for was he not the ruler of this village? He felt that he was almost as great a man as Ceasar himself.

Some of the fine of-fi-cers who were with Ceasar laughed. They said, "See how that fellow struts at the head of his little flock!"

"Laugh as you will," said Ceasar, "he has reason to be proud. I would rather be the head man of a village than the second man in Rome!"

At an-oth-er time, Ceasar was crossing a narrow sea in a boat. Before he was halfway to the farther shore, a storm overtook him. The wind blew hard; the waves dashed high; the lightning flashed; the thunder rolled.

It seemed every minute as though the boat would sink. The captain was in great fright. He had crossed the sea many times, but never in such a storm as this. He trembled with fear; he could not guide the boat; he fell down upon his knees; he moaned, "All is lost! all is lost!"

But Ceasar was not afraid. He bade the man get up and take his oars again.

"Why should you be afraid?" he said. "The boat will not be lost; for you have Ceasar on board."

Return to the James Baldwin Home Page, or . . . Read the next short story; King Alfred and the Beggar