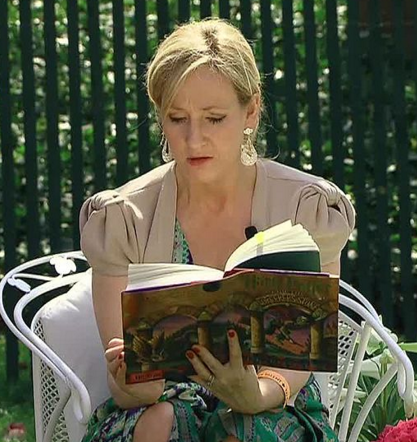 J.K. Rowling is the English novelist recognized worldwide as the creator of Harry Potter, the best selling series in history, "witch" created a huge cultural phenomena. It prompted torrents of young adults (and adults) to enjoy reading fiction, selling over 500 million copies. June, 2017, marked the 20th anniversary of the first book published, "Harry Potter and the Sorcerer's Stone" which sold over 120 million. Apparently she got the idea for the young wizard in 1990 while waiting on a stalled train between Manchester and London-- how's that for turning a travel delay into something productive?

Much to the delight of her fans, Rowling recently released what's considered the eighth in her series, the script Harry Potter and the Cursed Child, Parts I and II (2016), which was the first Harry Potter to be adapted into a play by Jack Thorne.

We feature Rowling in our Feminist Literature - Study Guide. Though her work is not yet in the public domain, we encourage you to read some of our great adventure and fantasy stories in The Children's Library.