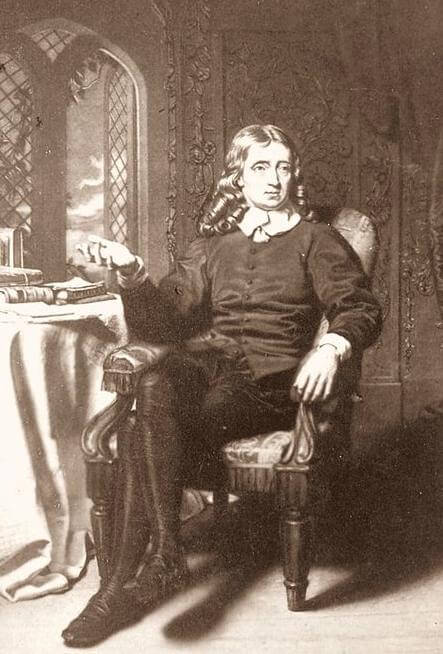 John Milton (1608 - 1674) was a poet, polemic (master of delivering contentious rhetoric), and civil servant for the Commonwealth of England under Oliver Cromwell. His scholarly accomplishments included learning ten languages, including Syriac and Aramaic. His legacy, one of the cornerstones of English literature, is his epic poem, Paradise Lost (1667). Milton's stated purpose for writing the poem was "to justify the existence of God and man." No wonder it took ten books containing over ten thousand lines of verse.
[Featured 19th century reproduction by Günter Josef Radig.]

In addition to tackling such a lofty subject so deliberately, what's more remarkable about Milton's accomplishment is that he composed his master work totally blind (long before the era of technology-assisted speech-to-text devices). Most likely due to untreated glaucoma, his eyesight deteriorated for years until he was totally blind by 1652 at the age of 44, fifteen years before Paradise Lost was published.

Arcades
Comus
L'Allegro
Lycidas
On Shakespeare. 1630.
To a Virtuous Young Lady
To the Nightingale