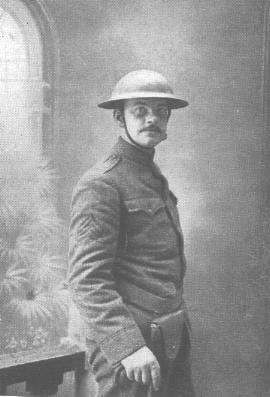 Joyce Kilmer (1886 - 1918) was an American poet and journalist, best known for his collection, Trees and Other Poems (1914). His signature poem begins: "I think that I shall never see / A poem lovely as a tree." Ogden Nash and other notable poet-humorists would parody Kilmer's best-known poem, a testament to its enduring appeal.

Kilmer's work includes his experiences during World War I, such as Prayer of a Soldier in France. He enlisted shortly after America entered the War in April, 1917; he was killed by a sniper's bullet at the Second Battle of the Marne in 1918 on July 30, 1918.
Read Kilmer's and other authors' works who served in the Great War in our collection, World War I Literature.