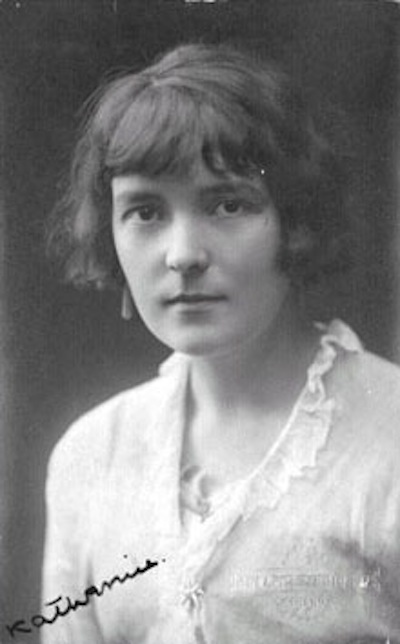 Katherine Mansfield Beauchamp (1888 – 1923) was a modernist writer from New Zealand, born into a prominent family in Wellington. She moved to England when she was 19 years old and matriculated at Queen's College with her sisters in 1903. She was close friends with other modernist writers, including D.H. Lawrence and Virginia Woolf.

Mansfield's writing was dramatically impacted by the effects of World War I, when her brother was killed after a demonstration grenade exploded in his hand in 1915. Her grief triggered her most famous stories as a memorial to him and their childhood: The Garden Party, Prelude, At the Bay, and An Indiscreet Journey. Other stand-out works include The Fly, and The Daughters of the Late Colonel.

Diagnosed during the war, she died of tuberculosis at the age of 34.

A Dill Pickle
A Man and His Dog
A Married Man's Story
An Ideal Family
At the Bay
Bank Holiday
Bliss
Feuille D'Album
Her First Ball
Je Ne Parle Pas Francais
Life of Ma Parker
Marriage a la Mode
Miss Brill
Mr and Mrs Dove
Mr. Reginald Peacock's Day
Pictures
Prelude
Psychology
Revelations
Sun And Moon
The Canary
The Daughters of the Late Colonel
The Doll's House
The Doves' Nest
The Escape
The Fly
The Garden Party
The Lady's Maid
The Little Governess
The Man Without a Temperament
The Singing Lesson
The Stranger
The Voyage
The Wind Blows
The Young Girl