Langston Hughes (1902 - 1967) is best known for the literary art form of jazz poetry, and for his work during the Harlem Renaissance. He was an American poet, social activist, novelist, playwright, and columnist.

Langston Hughes, was raised mainly by his maternal grandmother, Mary Patterson Langston, in Lawrence, Kansas. Mary Langston instilled in her grandson a lasting sense of racial pride. In The Big Sea (1940) he wrote, "I was unhappy for a long time, and very lonesome, living with my grandmother. Then it was that books began to happen to me, and I began to believe in nothing but books and the wonderful world in books -- where if people suffered, they suffered in beautiful language, not in monosyllables, as we did in Kansas."

Langston wrote for his high school newspaper in Cleveland, edited the yearbook, and began to write his first short stories, poetry, and dramatic plays. His first piece of jazz poetry, When Sue Wears Red, was written during this period. 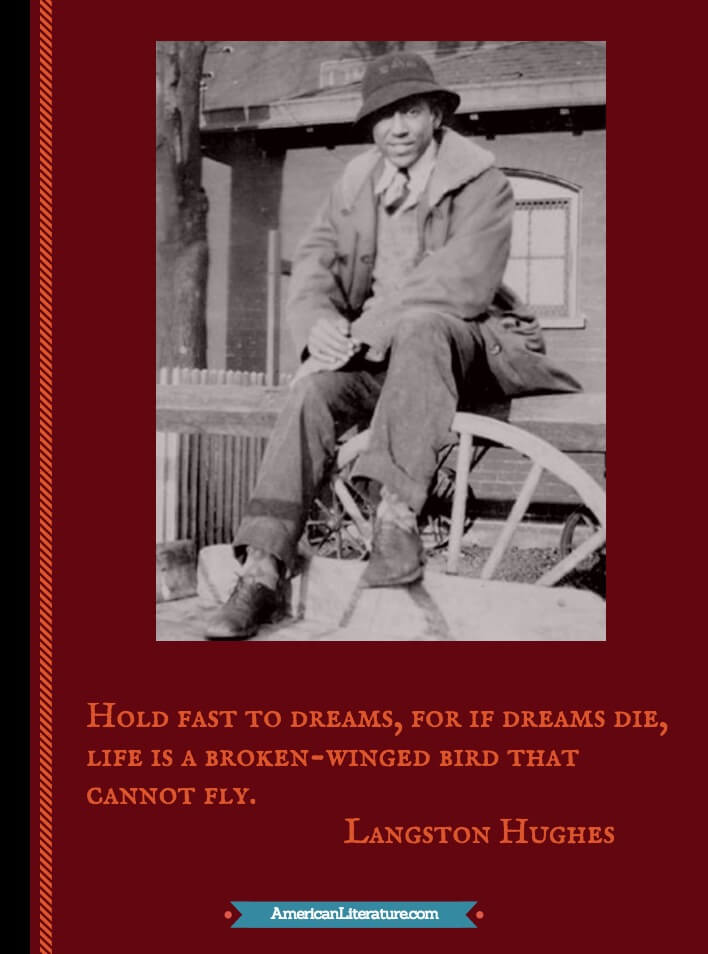 Hughes travelled extensively in Europe and West Africa, before settling into his first job working as an historian's assistant at The Association for the Study of African American Life and History in Washington, DC. Langston attended Lincoln University, a classmate of former Supreme Court Justice, Thurgood Marshall. He returned to New York City in 1929, where Hughes delved into a tremendously creative period referred to as the Harlem Renaissance in the 1920s-- working with such contemporaries as Nora Zeale Hurston, Wallace Thurman, Countee Cullen, and Aaron Douglas. The Negro Speaks of Rivers, which became Hughes's signature poem, was collected in his first book of poetry in 1926, The Weary Blues. Hughes's first and last published poems appeared in The Crisis, where more of his poems were published than any other journal.

Hughes and his peers depicted the "low-life" in their art, and came to celebrate the "black is beautiful" ethos. Hughes celebrated his own blackness in his writings, and he depicted and celebrated blacks whose strength, resiliency, courage, and humor, he wanted to memorialize and capture as an integral part of the American experience. Thank you M'am is his most famous short story. Hughes was one of the few black authors to champion racial consciousness as a source of inspiration, and cautioned young writers to avoid racial chauvinism and virulent anger in their work toward whites. He mentored many young black authors, including Alice Walker.

Hughes died in 1967 of cancer and complications from surgery. He will always be remembered for celebrating the lives of middle class blacks in America--their joys, struggles, courage, and lifted spirits-- to celebrate and define a black aesthetic that transcended racial stereotypes.

Visit American Literature's American History and the African American Library for other important authors and literature which helped shape America.