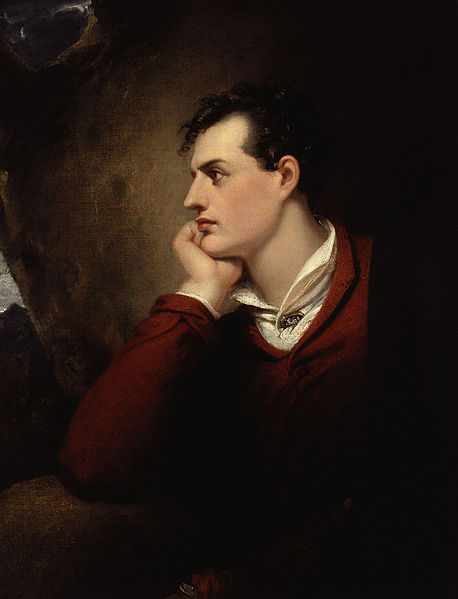 Englishman George Gordon Byron (1788 - 1824), known simply as Lord Byron, is considered one of the world's greatest poets. He was a leading figure in the romantic movement in the 19th century, which began with the sensational release of Childe Harold's Pilgrimage in 1812. The work make him an instant celebrity and paved the way for his literary legacy. Byron's significant epic narrative poems include The Corsair (1814), and Don Juan (1824).

She Walks in Beauty is one of the singular most lovely pieces in his large body of work. Its inspiration came in 1813, after Lord Byron encountered Mrs. John Wilmont at a ball. She was his cousin by marriage and attended the ball wearing all black. Lord Byron was struck by her beauty and penned the short lyrical poem the next morning.

Born into wealth and privilege, Lord Byron gained notoriety in literary circles with his early success, followed by earning a reputation for extravagance, "questionable morals" and a deviant lifestyle. Lord Byron embodied aristocratic excess, incurred huge debts, carried on numerous affairs with people of both sexes, and fathered at least two children out of wedlock. He was both celebrated and vilified for his behavior. Though Byron married Anne Isabella Milbanke in 1815 and had a child, Ada, his wife considered him insane and divorced him the following year. Byron's sexual dalliances were one reason for their unhappy marriage, but a disturbing obsession with his half-sister, Augusta. Byron's fixation on his half-sister attracted gossipy insinuations of incest.

With the scandal of divorce, the notoriety of his relationship with Augusta, and ever mounting debt piling up behind him, Byron left England in April 1916 and remained exiled in Greece for the last eight years of his life. In 1824, he died of fever after leading a troop of soldiers in the War of Greek Independence. One month following his death, against the wishes of his literary executor, Irish poet Thomas Moore, Byron's publishing firm, John Murray, decided to burn Byron's personal memoirs, rather than risk their public release, which surely would have further harmed his lascivious reputation. Speculation about its contents became one of the most celebrated literary works never read.

Read about Byron's literary executor and rival, Irish poet contemporary, Thomas Moore, who refused to reveal even a hint of Byron's memoirs, though opposed their burning. Byron was derisive towards Moore and his work, referring to his "leadless pistols."