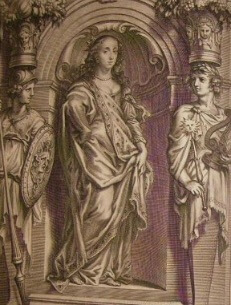 Margaret Lucas Cavendish (1623 - 1673), the Duchess of Newcastle-on-Tyne, was the first woman to publish using her own name, and wrote one of the founding texts in the genre of science fiction, The Blazing World (1666). It is a fantastical display of her intellect, imagination, and passion for natural science, featuring animal-human hybrids and a woman’s absolute rule as Empress over a parallel planet. [Pictured is the Empress from the frontispiece in The Blazing World.]

Cavendish's range of work included poetry, a play titled A Comedy of the Apocryphal Ladies, and scientific works, Observations on Experimental Philosophy (1666), in addition to her early science fiction. She broke numerous gender barriers, including attending a meeting of the Royal Society, and was considered an eccentric contrarian, nicknamed "Mad Madge" who dressed in an attention-grabbing blend of male and female garb. Samuel Pepys remarked in his Diary: She is a "good comely woman; but her dress so antic and her deportment so unordinary, that I do not like her at all, nor did I hear her say anything that was worth hearing.”

Cavendish was clearly a rebel in the Age of Enlightenment, at the forefront of imaginative works exploring the universe, time and space (such speculation was still considered heretical), at a time when scientific knowledge was expanding.