A Clever Thief
The Beetle and the Silken Thread
The Magic Pitcher
The Story of a Cat, a Mouse, a Lizard, and an Owl

Nancy Bell adapted a collection of ancient Hindu Tales from the Sanskrit in 1919, translated by S.M. Mitra, most of which had been inaccessible to Western culture before their publication. We feature the authors' work in our Favorite Fairy Tales and Short Stories for Middle School II. Indian literature fans may also appreciate the stories by Rudyard Kipling, Achmed Abdullah and Rabindranath Tagore.

Many animal fables, including the Panchatantra by the shaman Vishnu Sharma, were shared orally by Indian families for centuries. Their lessons espouse the virtues of self-realization, a cornerstone of Hindu philosophy. Rudyard Kipling's story, Rikki Tikki Tavi was inspired by Book Five of the Panchatantra. [Image at right is from the Great Epic Mahabharata, Draupadi Vastraharan scene, 1940.]

Other works by Bell include Humor in the Classroom, Discovery of Lakes Rudolf and Stefanie: a narrative of Count S. Teleki's exploring and hunting expedition in Eastern Equatorial Africa.

From the Introduction to her book, Hindu Tales from the Sanskrit:

"Thanks to Mr. S. M. Mitra, the well-known Hindu psychologist and politician, who has done so much to draw more closely together the land of his birth and that of his adoption, I am able to bring within reach of English children a number of typical Hindu Tales, translated by him from the Sanskrit, some of them culled from the ancient classics of India, others from widely separated sources. The latter have hitherto been quite inaccessible to western students, as they are not yet embodied in literature, but have been transmitted orally from generation to generation for many centuries. 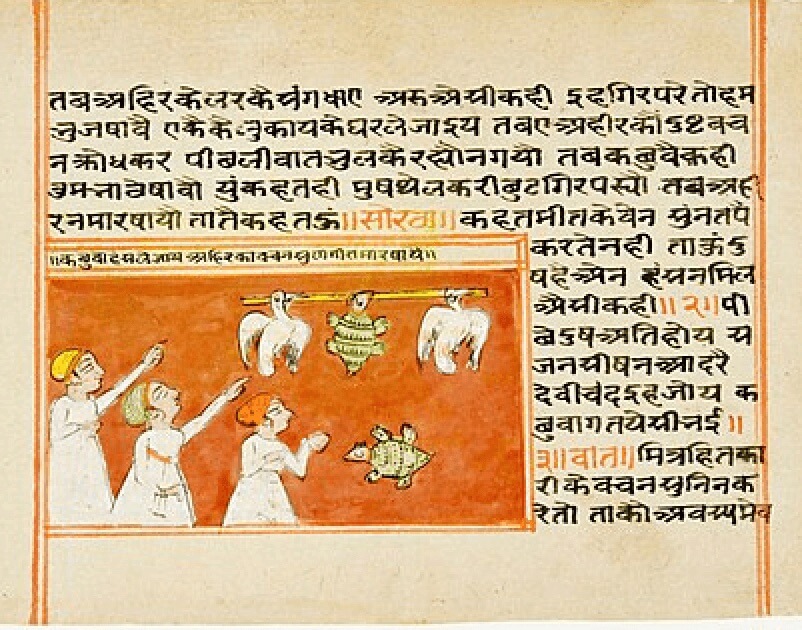 These tales are not only of a kind to enchain the attention of children. They also illustrate well the close affinity between the two chief branches of the great Aryan race, and are of considerable ethical value, reflecting, as they do, the philosophy of self-realisation which lies at the root of Hindu culture. They have been used from time immemorial by the best teachers of India as a means of building up the personalities of the young and maintaining the efficiency of the adult. They serve in fact as text-books of the unique system of Mind-Training which has been in use in India from remote Vedic times, the root principle of which is as simple as it is effective.

Hindu children become familiar at their mothers' knees with these stories, and are trained to answer questions on them, subtly chosen to suit their ages and call into action their mental faculties. Appealing to them as an amusing game, in which they vie with each other in trying to solve the problems presented for their consideration, the boys and girls, who are educated together till they are ten or twelve years old, early learn to concentrate their attention; whilst the simultaneous development of all their powers is encouraged and they are, imperceptibly to themselves led to control their thoughts and emotions from within, instead of having to obey orders which they do not understand from without. They realize indeed, whilst still in the nursery, the ideal suggested by the sage Vidura in the Mahabharata: "Seek to know thyself by means of thyself, keeping thy mind, intellect and senses, under control; for self is thy friend as it is also thy foe."