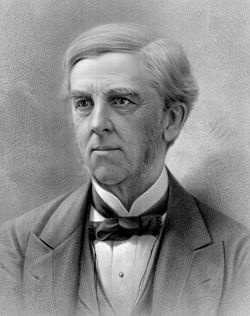 Oliver Wendell Holmes, Sr. (1809 - 1894) was an American poet, considered one of the best Romantic writers of his day. He was a member of the Fireside Poets, a group of New England poets whose themes of morality were popular in their day. Other members included Henry Wadsworth Longfellow, William Cullen Bryant, John Greenleaf Whittier, and James Russell Lowell.

Many of his most popular poems featured historical accounts of legendary events, such as Grandmother's Battle of Bunker Hill As She Saw It From the Belfry and Old Ironsides.

His son, Oliver Wendell Holmes, Jr. (1841-1935) was one of the most influential common law judges, serving as a Supreme Court Justice of the United States from 1902 to 1932. He's well known for his "clear and present danger" opinion for a unanimous Court in the 1919 case of Schenck v. United States. He was considered a scholar, third most cited justice of the twentieth century.

Bread and the Newspaper