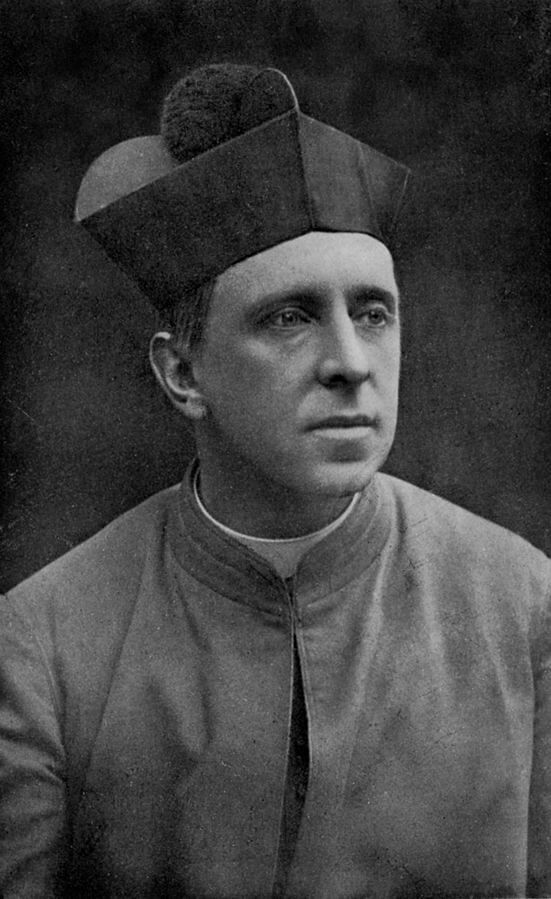 Robert Hugh Benson (1871-1914) was an English Anglican Priest, later ordained as a Roman Catholic priest, as well as a prolific writer of fiction. He wrote Dystopian novels, ghost stories, and children's stories. He is perhaps best noted for his Dystopian novel, Lord of the World, published in 1907. His brother is the sardonic author who wrote about cranks and blackmail among England's upper-crust, E.F. Benson.

You could say that Benson's ecclesiastical career was preordained. His father was the Archbishop of Canterbury. After graduating from Eton College, the young Benson studied classics and theology at Trinity College before being ordained by his father as a priest in the Church of England in 1895. He traveled to the Middle East after his father died suddenly in 1896, and began questioning the doctrine of the Church of England and other Anglican communities. He was received into the Roman Catholic Church in 1903. He eventually rose to become a Chamberlain to the Pope in 1911 and Monsignor.

Interestingly, Benson's novel, Lord of the World, which was written as he ascended the Roman Catholic Church's hierarchy, was praised as a prophetic, a doomsday account positing the reign of the Anti-Christ and end of the World. He received a barrage of hate-mail and accusations of being a traitor from the Anglican community after its publication in 1907. We feature his work in our collection of Dystopian Stories.

Lord of the World