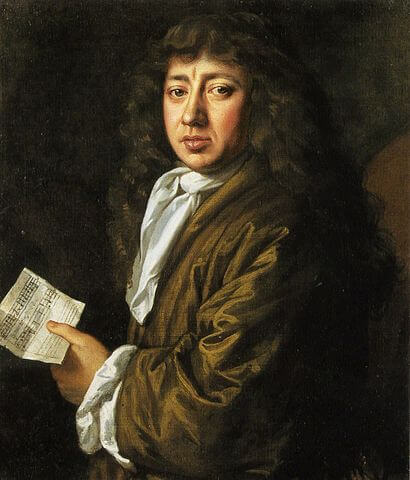 Samuel Pepys (1633 - 1703) was a celebrated English diarist who provided a rare personal account of events during the English Restoration period, including the Great Plague of London, the Second Dutch War, and the Great Fire of London. He was a member of Parliament and an administrator of the Navy of England. His reforms as Secretary to the Admiralty under both King Charles II and King James II led to the professionalization of the Royal Navy.

Pepys was the fifth of eleven children, witnessed the execution of Charles I, attended Cambridge University and suffered perpetual pain and illness throughout his lifetime due to bladder stones. He married and worked as a bank teller on Downing Street before beginning his daily journal entries on January 1, 1660. He wrote daily diary entries between 1660 and 1669, at least one million words, providing a rare first-hand account of political and social issues, the court, theatre, as well as his own weaknesses and opinions, providing historians with ample material to better understand the period. When he began writing, the country was in turmoil and civil unrest after Oliver Cromwell's death a few years earlier, resulting in a large power vacuum. Pepys had supported Cromwell, but converted to the Royalist party, and was on the ship that brought Charles II home to England. His diary documented the restoration of the British monarchy to the throne and the new king's coronation.

Publishing The Diary of Samuel Pepys is an interesting story in and of itself. John Smith, who became the Rector of St. Mary the Virgin in Baldock, engaged to transcribe the diaries, which were in short-hand, for three years beginning in 1819, unaware that the key to the diary's short-hand was just a few drawers away in Pepys' library. His transcription was kept in the Pepys Library, but the first published edition was edited by Lord Braybrooke, released in two volumes in 1825. We offer the 1893 version edited by Henry B. Wheatley.

The Diary of Samuel Pepys