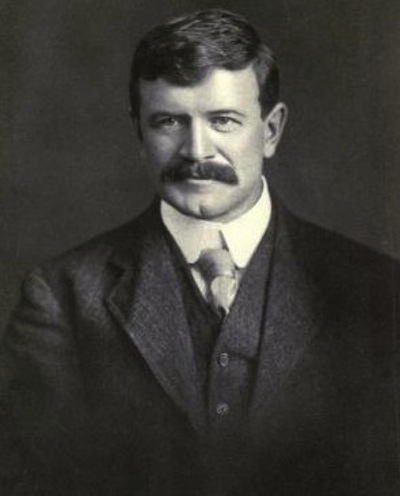 Stephen Butler Leacock (December 1869 – March 1944) was born in England and moved to Canada when he was six years old. He became a Canadian teacher, political scientist, writer, and humorist.

Leacock's wit and humour were not trifled with easily. A critic wrote, "What is there is, after all, in Professor Leacock's humour but a rather ingenious mixture of hyperbole and myosis?"

The man was right. How he stumbled on this trade secret I do not know. But I am willing to admit, since the truth is out, that it has been my custom in preparing an article of a humorous nature to go down to the cellar and mix up half a gallon of myosis with a pint of hyperbole. If I want to give the article a decidedly literary character, I find it well to put in about half a pint of paresis.

It's safe to say that one left a mark!

A Christmas Letter
A New Pathology
An Experiment with Policeman Hogan
Aristocratic Education
Boarding-House Geometry
Borrowing a Match
Helping the Armenians
How to Avoid Getting Married
How to Be a Doctor
How to Live to be 200
How to Make a Million Dollars
Insurance up to Date
Lord Oxhead's Secret
Men Who Have Shaved Me
Merry Christmas
My Financial Career
Number Fifty-Six
On Collecting Things
Our Compressed Old English Novel: Swearword, the Unpronounceable
Self-Made Men
Society Chit-Chat
The Awful Fate of Melpomenus Jones
The Errors of Santa Claus
The Force of Statistics
The New Food
The Poet Answered
Winter Pastimes