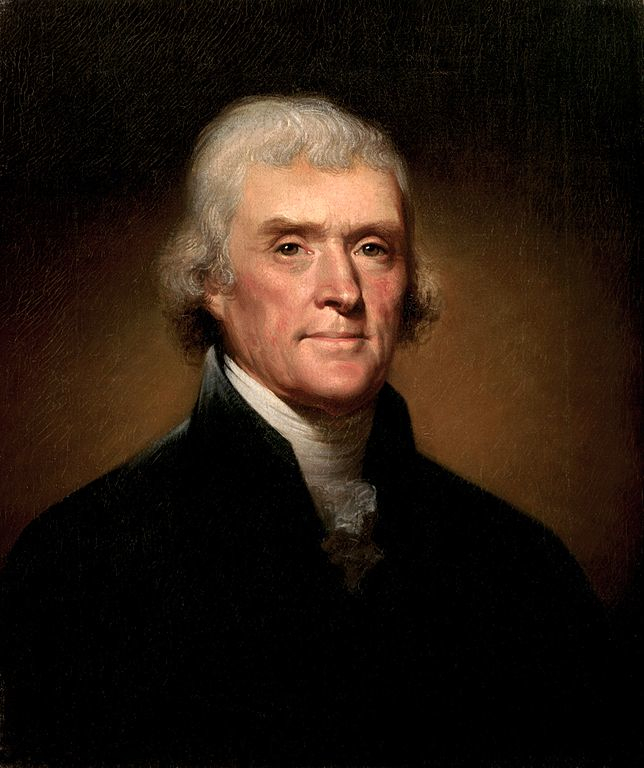 Thomas Jefferson (1743-1826) was the principal author and taskmaster of the five-person committee charged by the Continental Congress to create the epic document The Declaration of Independence (1776). After several painstaking drafts, its final version was a stunning statement of the colonists' rights to rebel against the British government and made a most compelling case for a new government uniting the colonies as free and independent states. The values it espoused were that all men are created equal and have the inalienable rights of life, liberty, and the pursuit of happiness.

Jefferson objected to several omissions from earlier drafts of The Declaration of Independence, specifically assigning the responsibility of the slave trade to King George. The final document was a collaborative effort by Jefferson, along with the other founding fathers: John Adams, George Washington, James Madison, Alexander Hamilton, James Monroe, Thomas Paine, and, of course, Benjamin Franklin. It serves as a testament to the new nation's founding principles and its legacy.

Librarians' hero: After the U.S. Library of Congress was burned by the British in 1814, Jefferson offered 6,487 volumes from his personal library for $23,950 to reseed the nation's Library, which has since grown to over 164 million items (838 miles of bookshelves), not including its ever-growing digital archive of media!.

Interesting fact: both Thomas Jefferson and John Adams died on the same day, July 4th, exactly fifty years after The Declaration of Independence was published in 1776. Lesser known is that James Monroe, the fifth president and last to never be photographed, also died on July 4th five years later, in 1831.

Visit American History to learn about other important American historical figures and their writings.

The Declaration of Independence