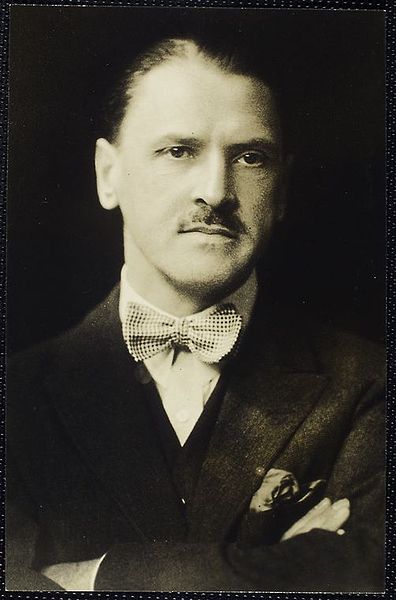 William Somerset Maugham (1874 - 1965), British playwright, novelist, and short story writer, earned the distinction of highest paid author of the 1930s. Orphaned at the age of ten and raised by an emotionally cold uncle, Maugham decided to become a doctor, bucking the trend of the men in his family practicing law. When his first book, Liza of Lambeth (1897) became popular and quickly sold-out, Maugham quit practicing medicine to begin writing full-time.

Maugham had an interesting career that shaped much of his writing before and after he became famous. During World War I, he was a Red Cross ambulance driver, he served the British Secret Service in Switzerland and Russia where he witnessed the Bolshevik Revolution of 1917, and he traveled extensively in India and and Southeast Asia.

Maugham's work often blurred fiction and non-fiction elements. He was charged with plagiarism in Vanity Fair by Aleister Crowley, the subject of Maugham's supernatural thriller, The Magician (1908). That did not seem to stop Maugham's commercial success. By 1914, Maugham produced ten plays and published ten novels. One of his best regarded works, Of Human Bondage (1915), a semi-autographical piece, was first panned by British and American critics as an overly sentimental romance novel. Then, Theodore Dreiser, influential author and critic, compared it to a Beethoven symphony. The book has never been out of print since. With Dreiser's kind words, Maugham's fortunes continued. It was adapted for film at least three times: 1934 (Bette Davis), 1946 (Eleanor Parker), and 1964 (Kim Novak).

Maugham spent World War II in Hollywood, the United States, as one of the most successful authors to profit from film adaptations, credited with at least thirty eight script adaptations for the screen, including The Razor's Edge in 1946 (Tyrone Power), and 1984 (Bill Murray). His stamina for writing continued with Moon and Six Pence, published in 1919, screenplay for the 1942 movie starring George Sanders,which is a biography of the artist, Paul Gauguin.

Though the majority of his success and fame stems from his memorable prose, we like his observation: "The crown of literature is poetry."