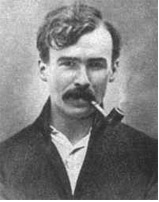 The Carpenters Son was published in Housman's collection of 63 poems in A Shropshire Lad (1896). Housman self-published the book after being turned down by several publishers. Themes tend to focus on unrequited love, pastoral beauty, fleeting youth, grief, death, and patriotism.
10

Add A Shropshire Lad - XLVII - The Carpenters Son to your library.