Chapter I - IN WHICH WE ARE INTRODUCED TO WINNIE-THE-POOH AND SOME BEES, AND THE STORIES BEGIN 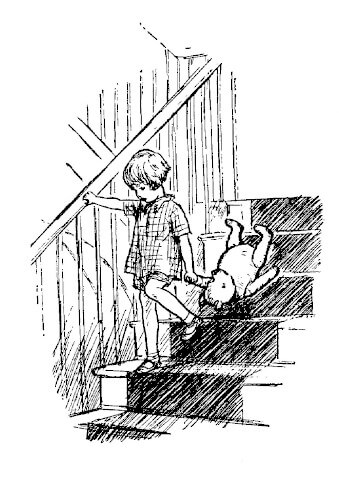 Here is Edward Bear, coming downstairs now, bump, bump, bump, on the back of his head, behind Christopher Robin. It is, as far as he knows, the only way of coming downstairs, but sometimes he feels that there really is another way, if only he could stop bumping for a moment and think of it. And then he feels that perhaps there isn't. Anyhow, here he is at the bottom, and ready to be introduced to you. Winnie-the-Pooh.

When I first heard his name, I said, just as you are going to say, "But I thought he was a boy?"

"So did I," said Christopher Robin.

"Then you can't call him Winnie?"

"Ah, yes, now I do," I said quickly; and I hope you do too, because it is all the explanation you are going to get.

Sometimes Winnie-the-Pooh likes a game of some sort when he comes downstairs, and sometimes he likes to sit quietly in front of the fire and listen to a story. This evening——

"What about a story?" said Christopher Robin.

"Could you very sweetly tell Winnie-the-Pooh one?"

"I suppose I could," I said. "What sort of stories does he like?"

"About himself. Because he's that sort of Bear."

"So could you very sweetly?"

Once upon a time, a very long time ago now, about last Friday, Winnie-the-Pooh lived in a forest all by himself under the name of Sanders.

("What does 'under the name' mean?" asked Christopher Robin.

"It means he had the name over the door in gold letters, and lived under it."

Winnie-the-Pooh sat down at the foot of the tree, put his head between his paws and began to think.

Then he thought another long time, and said: "And the only reason for being a bee that I know of is making honey."

And then he got up, and said: "And the only reason for making honey is so as I can eat it." So he began to climb the tree.

He was getting rather tired by this time, so that is why he sang a Complaining Song. He was nearly there now, and if he just stood on that branch ...

"Oh, help!" said Pooh, as he dropped ten feet on the branch below him.

"If only I hadn't——" he said, as he bounced twenty feet on to the next branch.

"Of course, it was rather——" he admitted, as he slithered very quickly through the next six branches.

"It all comes, I suppose," he decided, as he said good-bye to the last branch, spun round three times, and flew gracefully into a gorse-bush, "it all comes of liking honey so much. Oh, help!"

He crawled out of the gorse-bush, brushed the prickles from his nose, and began to think again. And the first person he thought of was Christopher Robin.

("Was that me?" said Christopher Robin in an awed voice, hardly daring to believe it.

Christopher Robin said nothing, but his eyes got larger and larger, and his face got pinker and pinker.)

So Winnie-the-Pooh went round to his friend Christopher Robin, who lived behind a green door in another part of the forest.

"I wonder if you've got such a thing as a balloon about you?"

"Yes, I just said to myself coming along: 'I wonder if Christopher Robin has such a thing as a balloon about him?' I just said it to myself, thinking of balloons, and wondering."

"What do you want a balloon for?" you said.

Winnie-the-Pooh looked round to see that nobody was listening, put his paw to his mouth, and said in a deep whisper: "Honey!"

"But you don't get honey with balloons!"

Well, it just happened that you had been to a party the day before at the house of your friend Piglet, and you had balloons at the party. You had had a big green balloon; and one of Rabbit's relations had had a big blue one, and had left it behind, being really too young to go to a party at all; and so you had brought the green one and the blue one home with you.

He put his head between his paws and thought very carefully.

"Wouldn't they notice you underneath the balloon?" you asked.

"They might or they might not," said Winnie-the-Pooh. "You never can tell with bees." He thought for a moment and said: "I shall try to look like a small black cloud. That will deceive them."

"Then you had better have the blue balloon," you said; and so it was decided.

Well, you both went out with the blue balloon, and you took your gun with you, just in case, as you always did, and Winnie-the-Pooh went to a very muddy place that he knew of, and rolled and rolled until he was black all over; and then, when the balloon was blown up as big as big, and you and Pooh were both holding on to the string, you let go suddenly, and Pooh Bear floated gracefully up into the sky, and stayed there—level with the top of the tree and about twenty feet away from it.

"Isn't that fine?" shouted Winnie-the-Pooh down to you. "What do I look like?"

"You look like a Bear holding on to a balloon," you said.

"Not," said Pooh anxiously, "—not like a small black cloud in a blue sky?"

"Ah, well, perhaps from up here it looks different. And, as I say, you never can tell with bees."

There was no wind to blow him nearer to the tree, so there he stayed. He could see the honey, he could smell the honey, but he couldn't quite reach the honey.

After a little while he called down to you.

"Christopher Robin!" he said in a loud whisper.

"I think the bees suspect something!"

"What sort of thing?"

"I don't know. But something tells me that they're suspicious!" 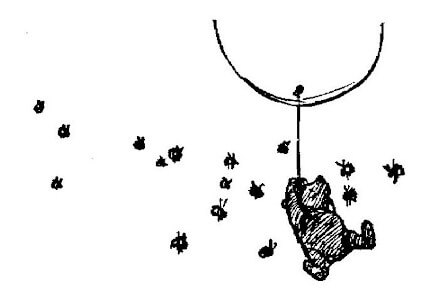 "Perhaps they think that you're after their honey."

"It may be that. You never can tell with bees."

There was another little silence, and then he called down to you again.

"Have you an umbrella in your house?"

"I wish you would bring it out here, and walk up and down with it, and look up at me every now and then, and say 'Tut-tut, it looks like rain.' I think, if you did that, it would help the deception which we are practising on these bees."

Well, you laughed to yourself, "Silly old Bear!" but you didn't say it aloud because you were so fond of him, and you went home for your umbrella.

"Oh, there you are!" called down Winnie-the-Pooh, as soon as you got back to the tree. "I was beginning to get anxious. I have discovered that the bees are now definitely Suspicious."

"Shall I put my umbrella up?" you said.

"A pity. Well, now, if you walk up and down with your umbrella, saying, 'Tut-tut, it looks like rain,' I shall do what I can by singing a little Cloud Song, such as a cloud might sing.... Go!"

So, while you walked up and down and wondered if it would rain, Winnie-the-Pooh sang this song:

The bees were still buzzing as suspiciously as ever. Some of them, indeed, left their nests and flew all round the cloud as it began the second verse of this song, and one bee sat down on the nose of the cloud for a moment, and then got up again.

"Christopher—ow!—Robin," called out the cloud.

"I have just been thinking, and I have come to a very important decision. These are the wrong sort of bees."

Winnie-the-Pooh hadn't thought about this. If he let go of the string, he would fall—bump—and he didn't like the idea of that. So he thought for a long time, and then he said:

"Christopher Robin, you must shoot the balloon with your gun. Have you got your gun?"

When he put it like this, you saw how it was, and you aimed very carefully at the balloon, and fired.

"You didn't exactly miss," said Pooh, "but you missed the balloon."

"I'm so sorry," you said, and you fired again, and this time you hit the balloon, and the air came slowly out, and Winnie-the-Pooh floated down to the ground.

But his arms were so stiff from holding on to the string of the balloon all that time that they stayed up straight in the air for more than a week, and whenever a fly came and settled on his nose he had to blow it off. And I think—but I am not sure—that that is why he was always called Pooh.

"Is that the end of the story?" asked Christopher Robin.

"That's the end of that one. There are others."

"About Pooh and Me?"

"And Piglet and Rabbit and all of you. Don't you remember?"

"That day when Pooh and Piglet tried to catch the Heffalump——"

"Pooh couldn't, because he hasn't any brain. Did I catch it?"

"Well, that comes into the story."

"I do remember," he said, "only Pooh doesn't very well, so that's why he likes having it told to him again. Because then it's a real story and not just a remembering."

Christopher Robin gave a deep sigh, picked his Bear up by the leg, and walked off to the door, trailing Pooh behind him. At the door he turned and said, "Coming to see me have my bath?"

He nodded and went out, and in a moment I heard Winnie-the-Pooh—bump, bump, bump—going up the stairs behind him.