Chapter VII - IN WHICH KANGA AND BABY ROO COME TO THE FOREST, AND PIGLET HAS A BATH 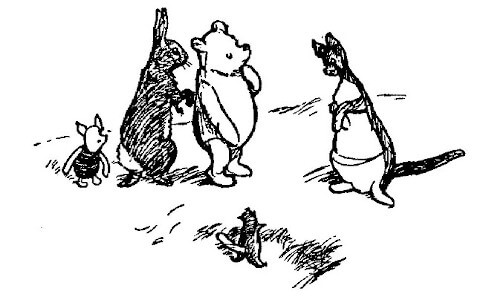 Nobody seemed to know where they came from, but there they were in the Forest: Kanga and Baby Roo. When Pooh asked Christopher Robin, "How did they come here?" Christopher Robin said, "In the Usual Way, if you know what I mean, Pooh," and Pooh, who didn't, said "Oh!" Then he nodded his head twice and said, "In the Usual Way. Ah!" Then he went to call upon his friend Piglet to see what he thought about it. And at Piglet's house he found Rabbit. So they all talked about it together.

"What I don't like about it is this," said Rabbit. "Here are we—you, Pooh, and you, Piglet, and Me—and suddenly——"

"Here—we—are," said Rabbit very slowly and carefully, "all—of—us, and then, suddenly, we wake up one morning and, what do we find? We find a Strange Animal among us. An animal of whom we have never even heard before! An animal who carries her family about with her in her pocket! Suppose I carried my family about with me in my pocket, how many pockets should I want?"

"Seventeen, isn't it?" said Rabbit. "And one more for a handkerchief—that's eighteen. Eighteen pockets in one suit! I haven't time."

There was a long and thoughtful silence ... and then Pooh, who had been frowning very hard for some minutes, said: "I make it fifteen."

Pooh rubbed his nose and said that he thought Rabbit had been talking about his family.

"Did I?" said Rabbit carelessly.

"The question is, What are we to do about Kanga?"

"The best way," said Rabbit, "would be this. The best way would be to steal Baby Roo and hide him, and then when Kanga says, 'Where's Baby Roo?' we say, 'Aha!'"

"We say 'Aha!' so that Kanga knows that we know where Baby Roo is. 'Aha!' means 'We'll tell you where Baby Roo is, if you promise to go away from the Forest and never come back.' Now don't talk while I think."

"Piglet," said Rabbit, taking out a pencil, and licking the end of it, "you haven't any pluck."

"It is hard to be brave," said Piglet, sniffing slightly, "when you're only a Very Small Animal."

Rabbit, who had begun to write very busily, looked up and said:

"It is because you are a very small animal that you will be Useful in the adventure before us."

Piglet was so excited at the idea of being Useful, that he forgot to be frightened any more, and when Rabbit went on to say that Kangas were only Fierce during the winter months, being at other times of an Affectionate Disposition, he could hardly sit still, he was so eager to begin being useful at once.

"What about me?" said Pooh sadly. "I suppose I shan't be useful?"

"Without Pooh," said Rabbit solemnly as he sharpened his pencil, "the adventure would be impossible."

"Oh!" said Piglet, and tried not to look disappointed. But Pooh went into a corner of the room and said proudly to himself, "Impossible without Me! That sort of Bear."

"Now listen all of you," said Rabbit when he had finished writing, and Pooh and Piglet sat listening very eagerly with their mouths open. This was what Rabbit read out:

Well, Rabbit read this out proudly, and for a little while after he had read it nobody said anything. And then Piglet, who had been opening and shutting his mouth without making any noise, managed to say very huskily:

"When Kanga does Discover the Difference?"

"Why, what's the trouble, Piglet?"

"Yes, only being Fierce in the Winter Months."

"Well, you just have to talk very hard to Kanga so as she doesn't notice anything."

"You mean like telling her a little bit of poetry or something?"

So they all went out to look for Kanga.

Kanga and Roo were spending a quiet afternoon in a sandy part of the Forest. Baby Roo was practising very small jumps in the sand, and falling down mouse-holes and climbing out of them, and Kanga was fidgeting about and saying "Just one more jump, dear, and then we must go home." And at that moment who should come stumping up the hill but Pooh.

"Look at me jumping," squeaked Roo, and fell into another mouse-hole.

Rabbit and Piglet, who had now come up from the other side of the hill, said "Good afternoon," and "Hallo, Roo," and Roo asked them to look at him jumping, so they stayed and looked.

And Kanga looked too....

"Oh, Kanga," said Pooh, after Rabbit had winked at him twice, "I don't know if you are interested in Poetry at all?"

"Hardly at all," said Kanga.

"Roo, dear, just one more jump and then we must go home."

There was a short silence while Roo fell down another mouse-hole.

"Go on," said Rabbit in a loud whisper behind his paw.

"Talking of Poetry," said Pooh, "I made up a little piece as I was coming along. It went like this. Er—now let me see——"

"Yes, it is, isn't it?" said Kanga, not waiting to hear what happened on Friday. "Just one more jump, Roo, dear, and then we really must be going."

"Talking of Poetry," said Pooh quickly, "have you ever noticed that tree right over there?"

"Right over there," said Pooh, pointing behind Kanga's back.

"You ought to look at that tree right over there," said Rabbit. "Shall I lift you in, Roo?" And he picked up Roo in his paws.

"You ought to see that bird from here," said Rabbit. "Unless it's a fish."

"Is it a starling or a blackbird?" said Pooh.

"That's the whole question," said Rabbit. "Is it a blackbird or a starling?"

And then at last Kanga did turn her head to look. And the moment that her head was turned, Rabbit said in a loud voice "In you go, Roo!" and in jumped Piglet into Kanga's pocket, and off scampered Rabbit, with Roo in his paws, as fast as he could.

"Why, where's Rabbit?" said Kanga, turning round again. "Are you all right, Roo, dear?"

Piglet made a squeaky Roo-noise from the bottom of Kanga's pocket.

"Rabbit had to go away," said Pooh. "I think he thought of something he had to go and see about suddenly."

"I think Piglet thought of something at the same time. Suddenly."

"Well, we must be getting home," said Kanga. "Good-bye, Pooh." And in three large jumps she was gone.

Pooh looked after her as she went.

But there were moments when Piglet wished that Kanga couldn't. Often, when he had had a long walk home through the Forest, he had wished that he were a bird; but now he thought jerkily to himself at the bottom of Kanga's pocket,

"If is shall really to

flying I never it."

Of course as soon as Kanga unbuttoned her pocket, she saw what had happened. Just for a moment, she thought she was frightened, and then she knew she wasn't; for she felt quite sure that Christopher Robin would never let any harm happen to Roo. So she said to herself, "If they are having a joke with me, I will have a joke with them."

"Aha!" said Piglet, as well as he could after his Terrifying Journey. But it wasn't a very good "Aha!" and Kanga didn't seem to understand what it meant.

"Aha!" said Piglet again, looking round anxiously for the others. But the others weren't there. Rabbit was playing with Baby Roo in his own house, and feeling more fond of him every minute, and Pooh, who had decided to be a Kanga, was still at the sandy place on the top of the Forest, practising jumps.

"I am not at all sure," said Kanga in a thoughtful voice, "that it wouldn't be a good idea to have a cold bath this evening. Would you like that, Roo, dear?"

Piglet, who had never been really fond of baths, shuddered a long indignant shudder, and said in as brave a voice as he could:

"Kanga, I see that the time has come to spleak painly."

"Funny little Roo," said Kanga, as she got the bath-water ready.

"Yes, dear, yes," said Kanga soothingly. "And imitating Piglet's voice too! So clever of him," she went on, as she took a large bar of yellow soap out of the cupboard. "What will he be doing next?"

"I am looking, Roo, dear," said Kanga rather severely. "And you know what I told you yesterday about making faces. If you go on making faces like Piglet's, you will grow up to look like Piglet—and then think how sorry you will be. Now then, into the bath, and don't let me have to speak to you about it again."

Before he knew where he was, Piglet was in the bath, and Kanga was scrubbing him firmly with a large lathery flannel.

"You—you—you did it on purpose," spluttered Piglet, as soon as he could speak again ... and then accidentally had another mouthful of lathery flannel.

"That's right, dear, don't say anything," said Kanga, and in another minute Piglet was out of the bath, and being rubbed dry with a towel.

"Now," said Kanga, "there's your medicine, and then bed."

"To make you grow big and strong, dear. You don't want to grow up small and weak like Piglet, do you? Well, then!"

At that moment there was a knock at the door.

"Come in," said Kanga, and in came Christopher Robin.

Christopher Robin looked at him very carefully, and shook his head.

"You can't be Roo," he said, "because I've just seen Roo playing in Rabbit's house."

"Well!" said Kanga. "Fancy that! Fancy my making a mistake like that."

"Oh, you're not Piglet," he said. "I know Piglet well, and he's quite a different colour."

Piglet began to say that this was because he had just had a bath, and then he thought that perhaps he wouldn't say that, and as he opened his mouth to say something else, Kanga slipped the medicine spoon in, and then patted him on the back and told him that it was really quite a nice taste when you got used to it.

"Perhaps it's some relation of Pooh's," said Christopher Robin. "What about a nephew or an uncle or something?"

Kanga agreed that this was probably what it was, and said that they would have to call it by some name.

"I shall call it Pootel," said Christopher Robin. "Henry Pootel for short."

And just when it was decided, Henry Pootel wriggled out of Kanga's arms and jumped to the ground. To his great joy Christopher Robin had left the door open. Never had Henry Pootel Piglet run so fast as he ran then, and he didn't stop running until he had got quite close to his house. But when he was a hundred yards away he stopped running, and rolled the rest of the way home, so as to get his own nice comfortable colour again....