Chapter X - IN WHICH CHRISTOPHER ROBIN GIVES POOH A PARTY, AND WE SAY GOOD-BYE 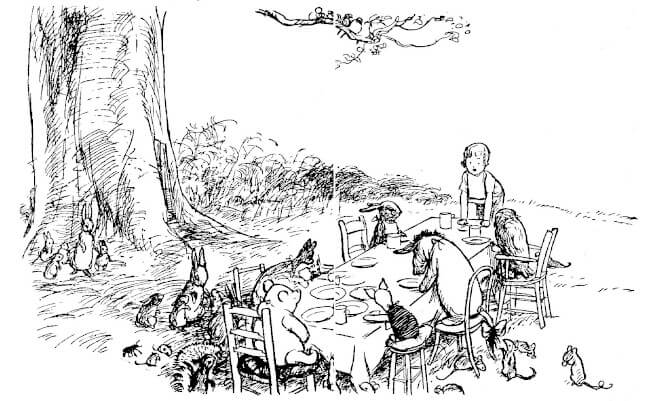 One day when the sun had come back over the Forest, bringing with it the scent of may, and all the streams of the Forest were tinkling happily to find themselves their own pretty shape again, and the little pools lay dreaming of the life they had seen and the big things they had done, and in the warmth and quiet of the Forest the cuckoo was trying over his voice carefully and listening to see if he liked it, and wood-pigeons were complaining gently to themselves in their lazy comfortable way that it was the other fellow's fault, but it didn't matter very much; on such a day as this Christopher Robin whistled in a special way he had, and Owl came flying out of the Hundred Acre Wood to see what was wanted.

"Owl," said Christopher Robin, "I am going to give a party."

"And it's to be a special sort of party, because it's because of what Pooh did when he did what he did to save Piglet from the flood."

"Yes, so will you tell Pooh as quickly as you can, and all the others, because it will be to-morrow."

"Oh, it will, will it?" said Owl, still being as helpful as possible.

Owl tried to think of something very wise to say, but couldn't, so he flew off to tell the others. And the first person he told was Pooh.

"Pooh," he said, "Christopher Robin is giving a party."

"Oh!" said Pooh. And then seeing that Owl expected him to say something else, he said "Will there be those little cake things with pink sugar icing?"

Owl felt that it was rather beneath him to talk about little cake things with pink sugar icing, so he told Pooh exactly what Christopher Robin had said, and flew off to Eeyore.

"A party for Me?" thought Pooh to himself. "How grand!" And he began to wonder if all the other animals would know that it was a special Pooh Party, and if Christopher Robin had told them about The Floating Bear and the Brain of Pooh and all the wonderful ships he had invented and sailed on, and he began to think how awful it would be if everybody had forgotten about it, and nobody quite knew what the party was for; and the more he thought like this, the more the party got muddled in his mind, like a dream when nothing goes right. And the dream began to sing itself over in his head until it became a sort of song. It was an

While this was going on inside him, Owl was talking to Eeyore.

"Very interesting," said Eeyore. "I suppose they will be sending me down the odd bits which got trodden on. Kind and Thoughtful. Not at all, don't mention it."

"There is an Invitation for you."

"This isn't anything to eat, it's asking you to the party. To-morrow."

"You mean Piglet. The little fellow with the excited ears. That's Piglet. I'll tell him."

"Of course I'm sure. Christopher Robin said 'All of them! Tell all of them.'"

"All of them, except Eeyore?"

"All of them," said Owl sulkily.

But it didn't rain. Christopher Robin had made a long table out of some long pieces of wood, and they all sat round it. Christopher Robin sat at one end, and Pooh sat at the other, and between them on one side were Owl and Eeyore and Piglet, and between them on the other side were Rabbit, and Roo and Kanga. And all Rabbit's friends and relations spread themselves about on the grass, and waited hopefully in case anybody spoke to them, or dropped anything, or asked them the time.

It was the first party to which Roo had ever been, and he was very excited. As soon as ever they had sat down he began to talk.

Roo jumped up and down in his seat for a little while and then began again.

Piglet waved a paw at him, being too busy to say anything.

Eeyore nodded gloomily at him. "It will rain soon, you see if it doesn't," he said.

Roo looked to see if it didn't, and it didn't, so he said "Hallo, Owl!"—and Owl said "Hallo, my little fellow," in a kindly way, and went on telling Christopher Robin about an accident which had nearly happened to a friend of his whom Christopher Robin didn't know, and Kanga said to Roo, "Drink up your milk first, dear, and talk afterwards." So Roo, who was drinking his milk, tried to say that he could do both at once ... and had to be patted on the back and dried for quite a long time afterwards.

When they had all nearly eaten enough, Christopher Robin banged on the table with his spoon, and everybody stopped talking and was very silent, except Roo who was just finishing a loud attack of hiccups and trying to look as if it was one of Rabbit's relations.

"This party," said Christopher Robin, "is a party because of what someone did, and we all know who it was, and it's his party, because of what he did, and I've got a present for him and here it is." Then he felt about a little and whispered, "Where is it?"

While he was looking, Eeyore coughed in an impressive way and began to speak.

"Friends," he said, "including oddments, it is a great pleasure, or perhaps I had better say it has been a pleasure so far, to see you at my party. What I did was nothing. Any of you—except Rabbit and Owl and Kanga—would have done the same. Oh, and Pooh. My remarks do not, of course, apply to Piglet and Roo, because they are too small. Any of you would have done the same. But it just happened to be Me. It was not, I need hardly say, with an idea of getting what Christopher Robin is looking for now"—and he put his front leg to his mouth and said in a loud whisper, "Try under the table"—"that I did what I did—but because I feel that we should all do what we can to help. I feel that we should all——"

"Was it me?" asked Roo, a little surprised.

"I thought this was your party."

"I thought it was once. But I suppose it isn't."

"I'd sooner it was yours than Eeyore's," said Piglet.

"AS—I—WAS—SAYING," said Eeyore loudly and sternly, "as I was saying when I was interrupted by various Loud Sounds, I feel that——"

"Here it is!" cried Christopher Robin excitedly. "Pass it down to silly old Pooh. It's for Pooh."

"Of course it is. The best bear in all the world."

"I might have known," said Eeyore. "After all, one can't complain. I have my friends. Somebody spoke to me only yesterday. And was it last week or the week before that Rabbit bumped into me and said 'Bother!' The Social Round. Always something going on."

Nobody was listening, for they were all saying "Open it, Pooh," "What is it, Pooh?" "I know what it is," "No, you don't" and other helpful remarks of this sort. And of course Pooh was opening it as quickly as ever he could, but without cutting the string, because you never know when a bit of string might be Useful. At last it was undone.

When Pooh saw what it was, he nearly fell down, he was so pleased. It was a Special Pencil Case. There were pencils in it marked "B" for Bear, and pencils marked "HB" for Helping Bear, and pencils marked "BB" for Brave Bear. There was a knife for sharpening the pencils, and india-rubber for rubbing out anything which you had spelt wrong, and a ruler for ruling lines for the words to walk on, and inches marked on the ruler in case you wanted to know how many inches anything was, and Blue Pencils and Red Pencils and Green Pencils for saying special things in blue and red and green. And all these lovely things were in little pockets of their own in a Special Case which shut with a click when you clicked it. And they were all for Pooh.

"Oh, Pooh!" said everybody else except Eeyore.

But Eeyore was saying to himself, "This writing business. Pencils and what-not. Over-rated, if you ask me. Silly stuff. Nothing in it."

Later on, when they had all said "Good-bye" and "Thank-you" to Christopher Robin, Pooh and Piglet walked home thoughtfully together in the golden evening, and for a long time they were silent. 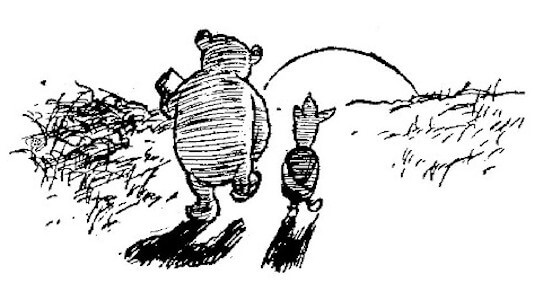 "When you wake up in the morning, Pooh," said Piglet at last, "what's the first thing you say to yourself?"

"What's for breakfast?" said Pooh. "What do you say, Piglet?"

"And what did happen?" asked Christopher Robin.

"Could you think and tell me and Pooh some time?"

"If you wanted it very much."

He gave a deep sigh, picked his bear up by the leg and walked off to the door, trailing Winnie-the-Pooh behind him. At the door he turned and said "Coming to see me have my bath?"

"Was Pooh's pencil case any better than mine?"

He nodded and went out ... and in a moment I heard Winnie-the-Pooh—bump, bump, bump—going up the stairs behind him. 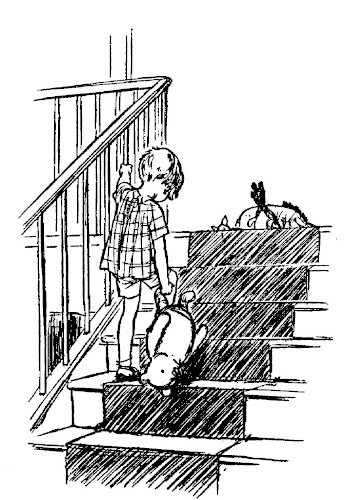