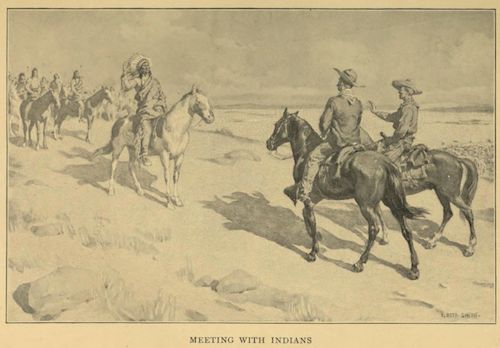 Andy Adams (May 3, 1859 - September 26, 1935) began his writing career at the age of 43. His parents were pioneers and he grew up handling cattle and horses on the family farm before moving to Texas in the 1880s where he spent 10 years driving cattle. He failed at a business venture and then attempted gold mining finally settling in Colorado Springs in 1894 where he lived until his death.

As a writer, Adams would draw heavily on that experience when he began writing. Disgusted by the unrealistic cowboy fiction being published at the time, Andy Adams took it upon himself to provide a better account and drew heavily on his first hand experiences to write The Log of a Cowboy in 1903. By almost all accounts, Andy Adams succeeded in his effort to produce a realistic portrait of life on the trail, and it is still widely considered the most compelling and accurate portrayal of cowboy life ever written. Enjoy more background about the cowboy scribe on The American Literary Blog.

A Texas Matchmaker
Reed Anthony, Cowman
The Log of a Cowboy
The Outlet
Wells Brothers