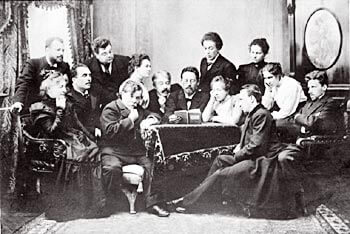 Widely heralded as Anton Chekhov's finest play, The Seagull, or The Sea-Gull (written in 1895, first performed in 1896) is a tragic comedy in four acts, based upon a real life incident involving the death of a gull. It is considered the first of Chekhov's four major plays. [Photo of Anton Chekhov reading "The Seagull" with the Moscow Art Theatre Company, 1899.]

The play is a poignant love story that follows a struggling writer, Konstantin, as he seeks the love of Nina, a budding actress. A host of characters witness and remark on Konstantin's suffering as the romance skirts the grounds of a country estate. This sad tale of crushed hopes and dreams features rich character sketches. The symbolism of the dying sea gull underscores the tragedy. It has been adapted on stage and film numerous times, most recently in a 2018 movie starring Annette Bening.

Return to the Anton Chekhov library.