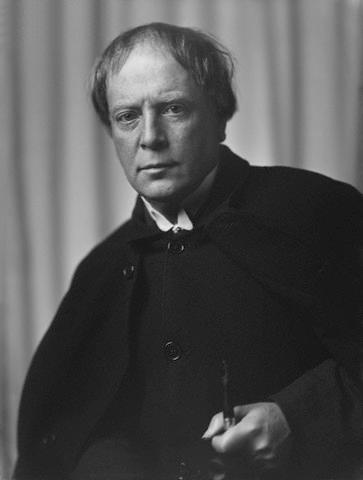 Welsh writer Arthur Machen (1863 - 1947) was an author and mystic. He hailed from a long line of clergymen but became an influential Gothic writer producing supernatural, fantasy and horror fiction. The portrait depicts the author in 1905 and his outfit suggests that he knew a bit about showmanship as well writing.

His most famous work is his novella The Great God Pan which is an absolute masterpiece of the gothic and horror genres. When it was released in 1890 (and revised in 1894) critics attacked its sexual content and decadent style. Today it is considered a horror class praised by both modern day writers like Stephen King and classic authors like H.P. Lovecraft who said, "No one could begin to describe the cumulative suspense and ultimate horror with which every paragraph abounds."

Machen is featured in our Gothic Literature Study Guide. Enjoy many of his stories, along with plenty of other spooky tales in our collections, Gothic, Ghost, Horror & Weird Library and Halloween Stories

The Hill of Dreams
The White People

The Bowmen
The Inmost Light
The Novel of the White Powder