Benjamin Franklin: Why Some Succeed While Others Fail

This biography of Benjamin Franklin was written by H.A. Lewis in his book, Hidden Treasures: Why Some Succeed While Others Fail (1887). Interesting fact: "In 1776 Congress sent him to France, where he became one of the greatest diplomats this country has ever known. During his voyage over he made observations relative to the Gulf Stream, and the chart he drew of it nearly [over 230] years ago, still forms the basis of maps on the subject."

Possibly there never has lived a man who has excited more comment than has the subject of this narrative, who was born in Boston, January 17th, 1706. His father was a soap boiler and tallow chandler, and he was the fifteenth in a family of seventeen children.

Young Benjamin was expected by his parents to become a minister of the Gospel, and for this purpose was placed in school at the age of eight, but the reduced circumstances of his father compelled his return home two years later, and he began the work of cutting wicks in his father's establishment. Afterwards he was bound to his brother James, who was a printer, where he worked hard all day, and often spent half the night in reading.

The secret of his great success can be readily perceived, when we know that his favorite books were Mather's "Essays to Do Good," and DeFoe's "Essays of Projects," and many others of a like nature: instead of the modern "Three Fingered Jack," "Calamity Jane," "The Queen of the Plains," or the more 'refined' of to-day's juvenile reading.

When he was about sixteen he wrote, in a disguised hand, an article for his brother's paper. This article was published anonymously, and excited great curiosity. Other articles followed, at length the identity of the author was discovered, and for some unknown reason the elder brother was offended. From that hour Benjamin resolved to leave Boston, as his brother's influence was used to his disadvantage in that city.

Embarking, he worked his passage to New York, where he arrived at the age of seventeen, almost penniless, and without recommendations. Failing to obtain work here he continued on to Philadelphia, where he arrived, disappointed but not discouraged. He now had but one dollar, and a few copper coins, in the world. Being hungry, he bought some bread, and with one roll under either arm, and eating the third, he passed up the street on which his destined wife lived, and she beheld him as he presented this ridiculous appearance. Obtaining employment, he secured board and lodging with Mr. Reed, afterward his father-in-law.

Being induced to think of going into business for himself, through promises of financial help from influential parties, he sailed to London for the purpose of buying the necessary requisites for a printing office. Not until his arrival in that great city, London, did he learn of the groundlessness of his hope for aid from the expected quarter. In a strange land, friendless and alone, without money to pay his return passage, such was his predicament; yet he lost not his courage, but obtained employment as a printer, writing his betrothed that he should likely never return to America. His stay in London lasted, however, but about eighteen months, during which time he succeeded in reforming some of his beer-drinking companions.

In 1826 he returned to America as a dry-goods clerk, but the death of his employer fortunately turned his attention once more to his especial calling, and he soon after formed a partnership with a Mr. Meredith. This was in 1728. Miss Reed, during his stay abroad, had been induced to marry another man who proved to be a scoundrel; leaving her to escape punishment for debt, and, it is alleged, with an indictment for bigamy hanging over his head. Franklin attributed much of this misfortune to himself, and resolved to repair the injury so far as lay within his power. Accordingly he married her in 1830. This proved a most happy union. His business connection with Mr. Meridith being dissolved, he purchased the miserably conducted sheet of Mr. Keimer, his former employer, and under Franklin's management it became a somewhat influential journal of opinion. 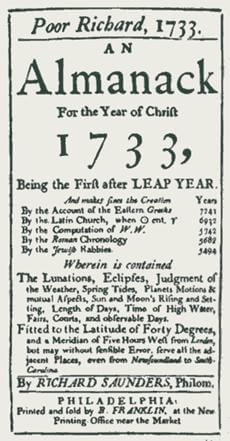 It was through this channel that those homely sayings, with such rich meanings, first appeared in print. His great intelligence, industry and ingenuity in devising reforms, and the establishment of the first circulating library, soon won for him the esteem of the entire country. 1732 is memorable as the year in which appeared his almanac in which was published the sayings of the world-famous 'Poor Richard.' This almanac abounded with aphorisms and quaint sayings, the influence of which tended mightily to economy, and it was translated into foreign languages, in fact was the most popular almanac ever printed.

After ten years' absence he returned to his native city, Boston, and his noble instincts were shown, as he consolingly promised his dying brother that he would care for his nephew, his brother's son. Returning to Philadelphia he became postmaster of that city, established a fire department, becomes a member of the Assembly, to which office he is elected ten consecutive years.

Although he was not an orator, no man wielded more influence over the legislative department than did Franklin. As is well-known, he invented the celebrated Franklin Stove, which proved so economical, and for which he refused a patent. For years he entertained the theory that galvanic electricity, and that which produced lightning and thunder were identical; but it was not until 1752 that he demonstrated the truth by an original but ingenious contrivance attached to a kite, and to Franklin we owe the honor of inventing the lightning rod, but not its abuse which has caused such widespread animosity to that valuable instrument of self-preservation.

These discoveries made the name of Franklin respected throughout the scientific world. Forever after this period, during his life, he was connected with national affairs. At one time he was offered a commission as General in the Provincial Army, but distrusting his military qualifications he unequivocally declined. Sir Humphrey Davy said: "Franklin seeks rather to make philosophy a useful inmate and servant in the common habitations of man, than to preserve her merely as an object for admiration in temples and palaces." While it is said of him by some that he always had a keen eye to his own interests all are forced to add he ever had a benevolent concern for the public welfare.

The burdens bearing so heavily upon the colonies: Pennsylvania, Maryland, Georgia, and Massachusetts, appointed Franklin as their agent to the mother-country. Arriving in London in 1757, despite his mission, honors awaited him at every turn. There he associated with the greatest men of his time, and the universities of Edinburgh and Oxford honored him with the title of L.L.D. and the poor journeyman printer of a few years before, associated with princes and kings. At the end of five years he returned to America, and in 1762 received the official thanks of the Assembly. Two years later he was again sent to England, and he opposed the obnoxious stamp act, and where he carried himself with decorum and great ability before the entire nobility. Upon his return to America he was made a member of the Assembly the day he landed, where he exerted his whole influence for a Declaration of Independence, and soon after had the pleasure of signing such a document.

In 1776 Congress sent him to France, where he became one of the greatest diplomats this country has ever known. During his voyage over he made observations relative to the Gulf Stream, and the chart he drew of it nearly one hundred years ago, still forms the basis of maps on the subject. As is well known, to Franklin more than all others, are we indebted for the kindly interference by France in our behalf, whose efforts, though ineffective in the field, helped the revolutionary cause wonderfully in gaining prestige. At the close of the war Franklin was one of the commissioners in framing that treaty which recognized American independence. His simple winning ways won for him admiration in any court of embroidery and lace, while his world-wide reputation as a philosopher and statesman won for him a circle of acquaintances of the most varied character. On the 17th of April, 1790, this great statesman died, and fully 20,000 people followed him to the tomb. The inscription he had designed read:

"The body of Benjamin Franklin, printer; Like the cover of an old book— Its contents torn out, and script of its lettering and gilding: Lies here food for worms."

Yet the work itself shall not be lost. For it will, as he believed, appear once more, in a new and more beautiful edition, corrected and amended by the Author. Truly, America has been rich in great men, of which Franklin was not the least. Dr. Franklin, in his will, left his native town of Boston, the sum of one thousand pounds, to be lent to the young married artificers upon good security and under odd conditions. If the plan should be carried out as successfully as he expected, he reckoned that this sum would amount in one hundred years to one hundred and thirty-one thousand pounds. It was his wish, and so expressed in his will that one hundred thousand pounds should be spent upon public works, "which may then be judged of most general utility to the inhabitants; such as fortifications, bridges, aqueducts, public buildings, baths, pavements, or whatever makes living in the town more convenient to its people, and renders it more agreeable to strangers resorting thither for health or temporary residence." It was also his wish that the remaining thirty-one thousand pounds should again be put upon interest for another hundred years, at the end of which time the whole amount was to be divided between the city and the State. The bequest at the end of the first one hundred years may not attain the exact figure he calculated, but it is sure to be a large sum. At the present time it is more than one hundred and seventy-five thousand dollars, and it has many years yet to run.

Benjamin Franklin: Why Some Succeed While Others Fail was featured as The Short Story of the Day on Tue, May 10, 2022

You may enjoy Nathaniel Hawthorne's story about Benjamin Franklin when he stole stones to build a public wharf. Enjoy reading stories about other famous Americans in Biographies for Kids & Adults