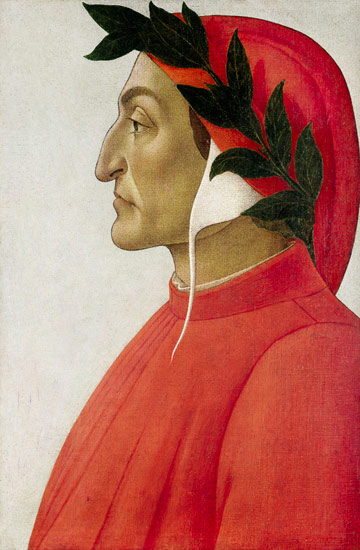 Durante degli Alighieri (1265-1321), simply known as Dante, was an Italian poet and statesman in the Middle Ages, best known for writing his epic poem, The Divine Comedy, commonly referred to as The Inferno. His work is considered a masterpiece of world literature.

Dante's work was unique in the late Middle Ages because he wrote in Italian, rather than Latin, which was only accessible to the privileged and educated class. He used vernacular in his work that appealed to a broader audience, albeit an "everyman's poet" who provided appreciative readers with greater access to literature. Dante is revered as "Il Sommo Poeta" (the Supreme Poet), and considered one of "the three crowns" of Italian literature, along with Petrarch, and Boccaccio. Portrait of Dante Alighieri is by Sandro Boticelli, 1495

The Divine Comedy
The Inferno