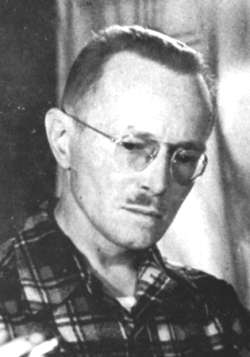 The American science fiction writer Fredric Brown (1906 - 1972) used humor and clever plot devices to write his short -- often quite brief -- short stories. He wrote in a variety of genres, whatever suited his fancy. Apparently he hated writing and sought every plausible distraction before sitting down to his typewriter. One of his short stories, Arena, was adapted into an episode of Star Trek.

"There are no rules. You can write a story, if you wish, with no conflict, no suspense, no beginning, middle or end. Of course, you have to be regarded as a genius to get away with it, and that's the hardest part -- convincing everybody you're a genius." -- Fredric Brown