The Fable of the Kid Who Shifted His Ideal

The Fable of the Kid Who Shifted His Ideal was published in Fables in Slang (1899). Reminiscent of works by his legendary mentor, Mark Twain.

An A.D.T. Kid carrying a Death Message marked "Rush" stopped in front of a Show Window containing a Picture of James J. Jeffries and began to weep bitterly. 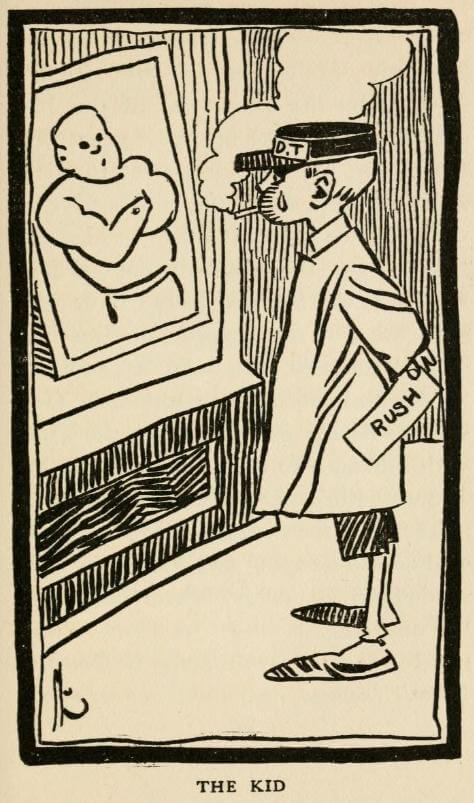 A kind-hearted Suburbanite happened to be passing along on his Way to the 5:42 Train. He was carrying a Dog Collar, a Sickle, a Basket of Egg Plums and a Bicycle Tire.

The Suburbanite saw the A.D.T. Kid in Tears and it struck him that here was a Bully Chance to act out the Kind-Hearted Pedestrian who is always played up strong in the Sunday School Stories about Ralph and Edgar.

"Why do you weep?" he asked, peering at the Boy through his concavo-convex Nose Glasses.

"What a perverted Ambition!" exclaimed the Suburbanite. "Why do you set up Mr. Jeffries as an Ideal? Why do you not strive to be like Me? Is it not worth a Life of Endeavor to command the Love and Respect of a Moral Settlement on the Outskirts? All the Conductors on our Division speak pleasantly to Me, and the Gateman has come to know my Name. Last year I had my Half-Tone in the Village Weekly for the mere Cost of the Engraving. When we opened Locust avenue from the Cemetery west to Alexander's Dairy, was I not a Member of the Committee appointed to present the Petition to the Councilmen? That's what I was! For Six Years I have been a Member of the League of American Wheelmen and now I am a Candidate for Director of our new four-hole Golf Club. Also I play Whist on the Train with a Man who once lived in the same House with T. DeWitt Talmage."

Hearing these words the A.D.T. Kid ceased weeping and cheerfully proceeded up an Alley, where he played "Wood Tag."

Moral: As the Twig is Bent the Tree is Inclined.

Return to the George Ade Home Page, or . . . Read the next short story; The Fable of the Man Who Didn't Care for Storybooks