The Fable of the Two Mandolin Players and His Willing Performer

The Fable of the Two Mandolin Players and His Willing Performer was published in Fables in Slang (1899). Cousin Gus was "as Fresh as the Mountain Air...coming nearer to Holding her Hand within Eight Minutes than Eustace had come in a Lifetime." 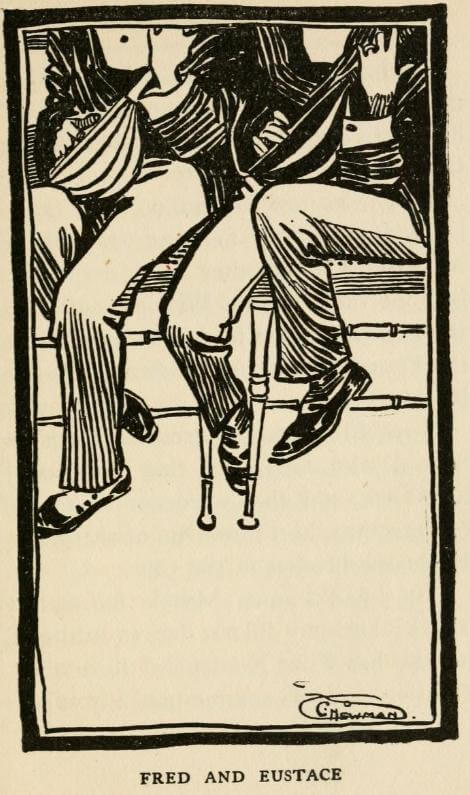 A very attractive Débutante knew two Young Men, who called on her every Thursday Evening and brought their Mandolins along. They were Conventional Young Men, of the Kind that you see wearing Spring Overcoats in the Clothing Advertisements. One was named Fred, and the other was Eustace.

The Mothers of the Neighborhood often remarked "What Perfect Manners Fred and Eustace have!" Merely as an aside it may be added that Fred and Eustace were more Popular with the Mothers than they were with the Younger Set, although no one could say a Word against either of them. Only it was rumored in Keen Society that they didn't Belong. The Fact that they went Calling in a Crowd, and took their Mandolins along, may give the Acute Reader some Idea of the Life that Fred and Eustace held out to the Young Women of their Acquaintance. 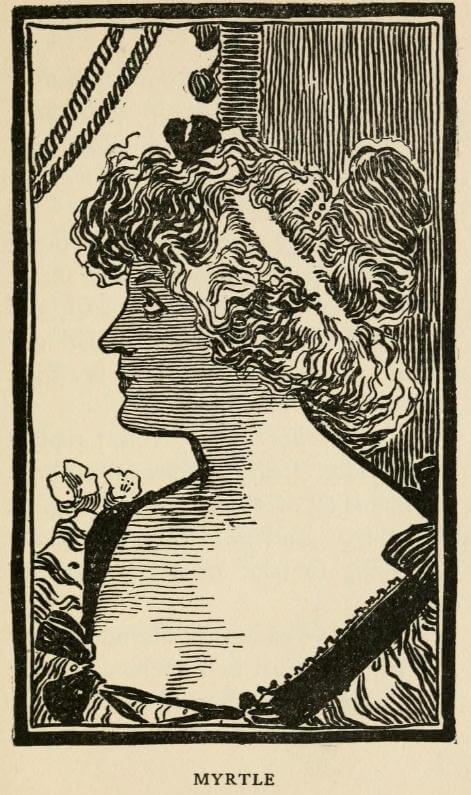 The Débutante's name was Myrtle. Her Parents were very Watchful, and did not encourage her to receive Callers, except such as were known to be Exemplary Young Men. Fred and Eustace were a few of those who escaped the Black List. Myrtle always appeared to be glad to see them, and they regarded her as a Darned Swell Girl.

Fred's Cousin came from St. Paul on a Visit; and one Day, in the Street, he saw Myrtle, and noticed that Fred tipped his Hat, and gave her a Stage Smile.

"Oh, Queen of Sheba!" exclaimed the Cousin from St. Paul, whose name was Gus, as he stood stock still and watched Myrtle's Reversible Plaid disappear around a Corner. "She's a Bird. Do you know her well?"

"I know her Quite Well," replied Fred, coldly. "She is a Charming Girl."

"She is all of that. You're a great Describer. And now what Night are you going to take me around to Call on her?"

Fred very naturally Hemmed and Hawed. It must be remembered that Myrtle was a member of an Excellent Family, and had been schooled in the Proprieties, and it was not to be supposed that she would crave the Society of slangy old Gus, who had an abounding Nerve, and furthermore was as Fresh as the Mountain Air.

He was the Kind of Fellow who would see a Girl twice, and then, upon meeting her the Third Time, he would go up and straighten her Cravat for her, and call her by her First Name.

Put him into a Strange Company—en route to a Picnic—and by the time the Baskets were unpacked he would have a Blonde all to himself, and she would have traded her Fan for his College Pin.

If a Fair-Looker on the Street happened to glance at him Hard he would run up and seize her by the Hand, and convince her that they had Met. And he always Got Away with it, too.

In a Department Store, while awaiting for the Cash Boy to come back with the Change, he would find out the Girl's Name, her Favorite Flower, and where a Letter would reach her.

Upon entering a Parlor Car at St. Paul he would select a Chair next to the Most Promising One in Sight, and ask her if she cared to have the Shade lowered.

Before the Train cleared the Yards he would have the Porter bringing a Foot-Stool for the Lady.

At Hastings he would be asking her if she wanted Something to Read.

At Red Wing he would be telling her that she resembled Maxine Elliott, and showing her his Watch, left to him by his Grandfather, a Prominent Virginian.

At La Crosse he would be reading the Menu Card to her, and telling her how different it is when you have Some One to join you in a Bite.

At Milwaukee he would go out and buy a Bouquet for her, and when they rode into Chicago they would be looking but of the same Window, and he would be arranging for her Baggage with the Transfer Man. After that they would be Old Friends.

Now, Fred and Eustace had been at School with Gus, and they had seen his Work, and they were not disposed to Introduce him into One of the most Exclusive Homes in the City.

They had known Myrtle for many Years; but they did not dare to Address her by her First Name, and they were Positive that if Gus attempted any of his usual Tactics with her she would be Offended; and, naturally enough, they would be Blamed for bringing him to the House. 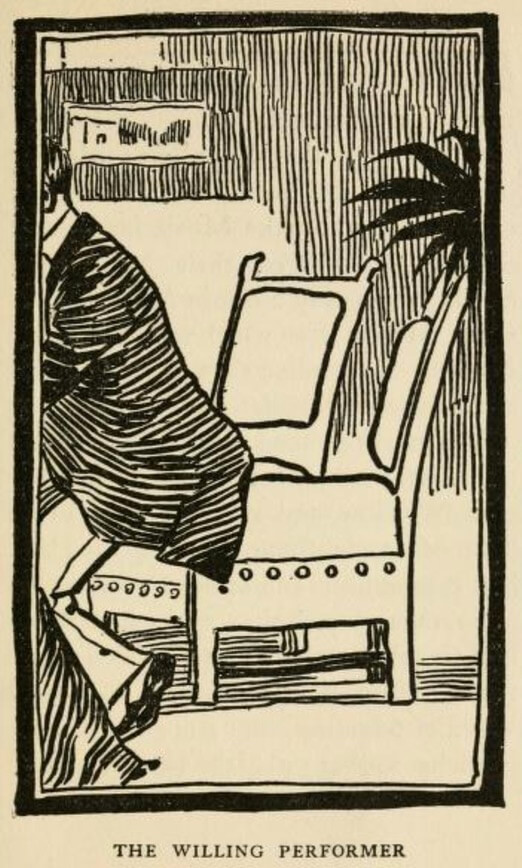 But Gus insisted. He said he had seen Myrtle, and she Suited him from the Ground up, and he proposed to have Friendly Doings with her. At last they told him they would take him if he promised to Behave. Fred warned him that Myrtle would frown down any Attempt to be Familiar on Short Acquaintance, and Eustace said that as long as he had known Myrtle he had never Presumed to be Free and Forward with her. He had simply played the Mandolin. That was as Far Along as he had ever got.

Gus told them not to Worry about him. All he asked was a Start. He said he was a Willing Performer, but as yet he never had been Disqualified for Crowding.

Fred and Eustace took this to mean that he would not Overplay his Attentions, so they escorted him to the House.

As soon as he had been Presented, Gus showed her where to sit on the Sofa, then he placed himself about Six Inches away and began to Buzz, looking her straight in the Eye. He said that when he first saw her he Mistook her for Miss Prentice, who was said to be the Most Beautiful Girl in St. Paul, only, when he came closer, he saw that it couldn't be Miss Prentice, because Miss Prentice didn't have such Lovely Hair. Then he asked her the Month of her Birth and told her Fortune, thereby coming nearer to Holding her Hand within Eight Minutes than Eustace had come in a Lifetime.

"Play something, Boys," he Ordered, just as if he had paid them Money to come along and make Music for him.

They unlimbered their Mandolins and began to play a Sousa March. He asked Myrtle if she had seen the New Moon. She replied that she had not, so they went Outside.

When Fred and Eustace finished the first Piece, Gus appeared at the open Window, and asked them to play "The Georgia Camp-Meeting," which had always been one of his Favorites.

So they played that, and when they had Concluded there came a Voice from the Outer Darkness, and it was the Voice of Myrtle. She said: "I'll tell you what to Play; play the Intermezzo."

Fred and Eustace exchanged Glances. They began to Perceive that they had been backed into a Siding. With a few Potted Palms in front of them, and two Cards from the Union, they would have been just the same as a Hired Orchestra.

But they played the Intermezzo and felt Peevish. Then they went to the Window and looked out. Gus and Myrtle were sitting in the Hammock, which had quite a Pitch toward the Center. Gus had braced himself by Holding to the back of the Hammock. He did not have his Arm around Myrtle, but he had it Extended in a Line parallel with her Back. What he had done wouldn't Justify a Girl in saying, "Sir!" but it started a Real Scandal with Fred and Eustace. They saw that the Only Way to Get Even with her was to go Home without saying "Good Night." So they slipped out the Side Door, shivering with Indignation.

After that, for several Weeks, Gus kept Myrtle so Busy that she had no Time to think of considering other Candidates. He sent Books to her Mother, and allowed the Old Gentleman to take Chips away from him at Poker.

They were Married in the Autumn, and Father-in-Law took Gus into the Firm, saying that he had needed a good Pusher for a Long Time.

At the Wedding the two Mandolin Players were permitted to act as Ushers.

MORAL: To get a fair Trial of Speed use a Pace-Maker.

The Fable of the Two Mandolin Players and His Willing Performer was featured as The Short Story of the Day on Wed, May 16, 2018
9.3

Add The Fable of the Two Mandolin Players and His Willing Performer to your library.

Return to the George Ade library