Strange Eclipse Customs is excerpted from The Story of Eclipses (1899), a popular science book for general readers published in anticipation of the May 28, 1900 solar eclipse. Apparently, the Babylonians, Mayan and Chinese all figured out the mathematical pattern to predict eclipses (which made them less scary), occurring somewhere on earth exactly 18 years, 11 days later.

I had intended heading this chapter “Eclipse Customs amongst Barbarous Nations,” but in these days it is dangerous to talk of barbarians or to speak one’s mind on points of social etiquette so I have thought it well to tone down the original title, otherwise I should have the partisans of the “Heathen Chinee” holding me up to scorn as a reviler of the brethren.

Did space permit a very interesting record might be furnished of eclipse customs in foreign parts.

An eclipse happened during Lord Macartney’s embassy to China [160] which kept the Emperor and his Mandarins for a whole day devoutly praying the gods that the Moon might not be eaten up by the great dragon which was hovering about her. The next day a pantomime was performed, exhibiting the battle of the dragon and the Moon, and in which two or three hundred priests, bearing lanterns at the end of long sticks, dancing and capering about, sometimes over the plain, and then over chairs and tables, bore no mean part.

Professor Russell, who is quoted elsewhere in this work with respect to Chinese eclipses, makes the following remarks in regard to what happens now in China when eclipses occur:—

“It will be interesting here to note that, even at present, by Imperial command, special rites are performed during solar and lunar eclipses. A president from each of the six boards, with two inferior officials, dressed in their official clothes, proceed to the T’ai-Ch’ang-Ssu. When the eclipse begins they change their robes for common garments made of plain black material, and kneeling down, burn incense. The president then beats one stroke on a gong, and the ceremony is taken up by all the attendant officials.” 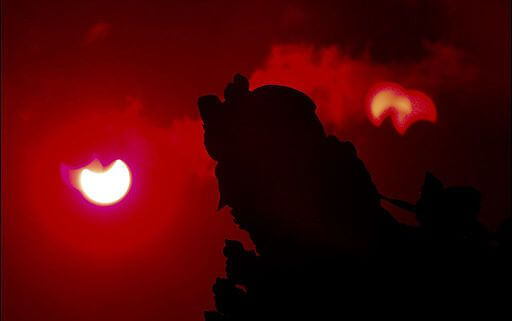 A writer in Chambers’s Journal [161] in an article entitled “The Hindu view of the late Eclipse,” gives an interesting and original account of divers Hindu superstitions and ceremonies which came under his notice in connection with the total eclipse of the Sun of Aug. 18, 1868. He remarks that “European science has as yet produced but little effect upon the minds of the superstitious masses of India. Of the many millions who witnessed the eclipse of the 18th of August last there were comparatively few who did not verily believe that it was caused by the dragon Rahu in his endeavour to swallow up the Lord of Day.... The pious Hindu, before the eclipse comes on, takes a torch, and begins to search his house and carefully removes all cooked food, and all water for drinking purposes. Such food and water, by the eclipse, incur Grahana seshah, that is, uncleanness, and are rendered unfit for use. Some, with less scruples of conscience, declare that the food may be preserved by placing on it dharba or Kusa grass,” and much more to the like effect is duly set out in the interesting article cited.

During the total eclipse of the Sun of Aug. 7, 1869, the following incident is noted[162] to have occurred at a station on the Chilkaht river, in Alaska, North America, frequented by Indians:—

“About the time the Sun was half obscured the chief Koh-Klux and all the Indians had disappeared from around the observing tent; they left off fishing on the river banks; all employments were discontinued; and every soul disappeared; nor was a sound heard throughout the village of 53 houses. The natives had been warned of what would take place, but doubted the prediction. When it did occur they looked upon me as the cause of the Sun’s being ‘very sick and going to bed.’ They were thoroughly alarmed, and overwhelmed with an undefinable dread.”

“On Monday last we were permitted to see the eclipse of the Sun in a beautiful bright sky. Not a cloud was visible. We had made ample preparation, laying in a stock of smoked glass several days in advance. It was the grandest sight I ever beheld, but it frightened the Indians badly. Some of them threw themselves upon their knees and invoked the Divine blessing; others flung themselves flat on the ground, face downward; others cried and yelled in frantic excitement and terror. Finally one old fellow stepped from the door of his lodge, pistol in hand, and fixing his eyes on the darkened Sun, mumbled a few unintelligible words and raising his arm took direct aim at the luminary, fired off his pistol, and after throwing his arms about his head in a series of extraordinary gesticulations retreated to his own quarters. As it happened, that very instant was the conclusion of totality. The Indians beheld the glorious orb of day once more peep forth, and it was unanimously voted that the timely discharge of that pistol was the only thing that drove away the shadow and saved them from the public inconvenience that would have certainly resulted from the entire extinction of the Sun.” A certain Mr. F. Kerigan, in a book published in 1844, made the following remarks on ancient Jewish ideas respecting eclipses:— “The Israelites, like their benighted neighbours, esteemed an eclipse of either luminary as a supernatural and inauspicious omen, which filled them with the most gloomy and fearful apprehensions: as may fairly be deduced from the 8th chapter of Ezekiel, v. 15: ‘Then he brought me to the door of the Lord’s House, which was towards the N.; and, behold there sat women weeping for Tammuz.’ Now Tammuz is the name under which Adonis was known in Palestine: he was the favourite of Venus, or Astarte, the principal goddess of the Philistines and Phœnicians. Being killed by a wild boar, the prevailing superstition of the age induced the uninformed multitude to believe that when the Moon was eclipsed, it was in complement to their beloved goddess Venus or Astarte, who, concealed behind the full Moon, sat weeping under a dark veil for the loss of her beloved Tammuz or Adonis.”[164]

The African travellers, R. and J. Lander, have given[165] a graphic account of what took place on the occasion of the eclipse of the Moon of Sept. 2, 1830, as witnessed by themselves:—“The earlier part of the evening had been mild, serene, and remarkably pleasant. The Moon had arisen with uncommon lustre, and being at the full, her appearance was extremely delightful. It was the conclusion of the holidays, and many of the people were enjoying the delicious coolness of a serene night, and resting from the laborious exertions of the day; but when the Moon became gradually obscured, fear overcame every one. As the eclipse increased they became more terrified. All ran in great distress to inform their sovereign of the circumstance, for there was not a single cloud to cause so deep a shadow, and they could not comprehend the nature or meaning of an eclipse.... Groups of men were blowing on trumpets, which produced a harsh and discordant sound; some were employed in beating old drums, others again were blowing on bullocks’ horns.... The diminished light, when the eclipse was complete, was just sufficient for us to distinguish the various groups of people, and contributed in no small degree to render the scene more imposing. If a European, a stranger to Africa, had been placed on a sudden in the midst of the terror-struck people, he would have imagined himself to be among a legion of demons, holding a revel over a fallen spirit.”

You may also enjoy reading James Fenimore Cooper's The Eclipse