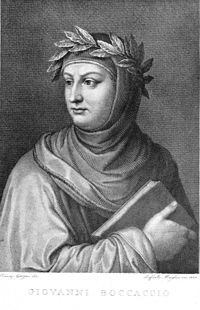 An Italian author and poet of the early Renaissance era, Giovanni Boccaccio (1313 - December 21, 1375) is known to modern readers as the author of The Decameron and On Famous Women.

Stylistically, Boccaccio stands apart from his contemporaries, for breaking with the tradition of his times, and forsaking the high-mannered, idealistic depictions that were common in the literature of the day. Instead, Boccaccio elected to write with a sense of realism; choosing to write in the common vernacular depicting realistic characters and scenes and having them interact with realistic dialogue.