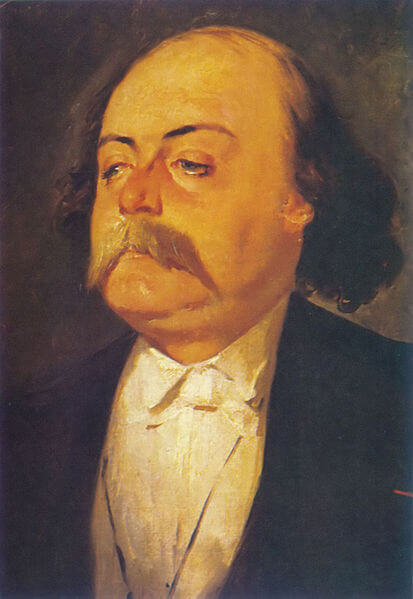 Gustave Flaubert (1821 - 1880) was a French novelist who was highly influential in the genre of Realism. His highly acclaimed first novel was Madame Bovary, published in 1857. Flaubert inspired one of our favorite French authors, the versatile Guy de Maupassant. Portrait at right by Eugene Giraud, 1856.

Flaubert grew up in Rouen, France and went to Paris to study law in 1840, where he was acquainted with Victor Hugo. After an epileptic episode, he abandoned Paris and the law in favor of traveling and writing. His first completed work was November, in 1842. Flaubert was a very deliberate writer, and after some flailed efforts at abstract fantasy, devoted his writing to the principle of finding "le mot juste" ("the right word"), which he considered as the key to the art of great literature. Thus, the genre of Realism came into focus. After returning from Egypt, it took over five years to complete his highest regarded work, Madame Bovary, which was serialized in the Revue de Paris in 1856 before being published in 1857. The government pressed charges of its immorality against the publisher and author, but they were later dismissed.

Flaubert was a prolific and obsessive writer, whose works included a short story collection, Three Tales in 1877, featuring The Legend of St. Julian the Hospitaller. The last novel he published before his death, Sentimental Education in 1869, took over seven years to complete. The work Flaubert considered to be his masterpiece was a satire on the futility of human knowledge, titled Bouvard et Pécuchet, which was printed posthumously in 1881.

A Simple Heart
The Legend of Saint Julian the Hospitaller

The Dance of Death