Book I - The Heat-Ray in Chobham Road 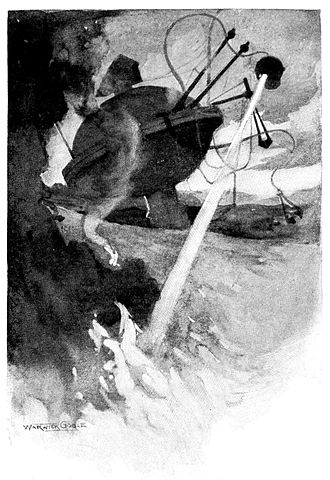 It is still a matter of wonder how the Martians are able to slay men so swiftly and so silently. Many think that in some way they are able to generate an intense heat in a chamber of practically absolute non-conductivity. This intense heat they project in a parallel beam against any object they choose by means of a polished parabolic mirror of unknown composition, much as the parabolic mirror of a light-house projects a beam of light. But no one has absolutely proved these details. However it is done, it is certain that a beam of heat is the essence of the matter. Heat, and invisible, instead of visible light. Whatever is combustible flashes into flame at its touch, lead runs like water, it softens iron, cracks and melts glass, and, when it falls upon water, incontinently that explodes into steam.

That night nearly forty people lay under the starlight about the pit, charred and distorted beyond recognition, and all night long the common from Horsell to Maybury was deserted and brightly ablaze.

The news of the massacre probably reached Chobham, Woking, and Ottershaw about the same time. In Woking the shops had closed when the tragedy happened, and a number of people, shop-people and so forth, attracted by the stories they had heard, were walking over Horsell Bridge and along the road between the hedges that run out at last upon the common. You may imagine the young people brushed up after the labors of the day, and making this novelty, as they would make any novelty, the excuse for walking together and enjoying a trivial flirtation. You may figure to yourself the hum of voices along the road in the gloaming. . . .

As yet, of course, few people in Woking even knew that the cylinder had opened, though poor Henderson had sent a messenger on a bicycle to the post-office with a special wire to an evening paper.

As these folks came out by twos and threes upon the open, they found little knots of people talking excitedly and peering at the spinning mirror over the sand-pits, and the newcomers were, no doubt, soon infected by the excitement of the occasion.

By half-past eight, when the Deputation was destroyed, there may have been a crowd of three hundred people or more at this place, besides those who had left the road to approach the Martians nearer. There were three policemen, too, one of whom was mounted, doing their best, under instructions from Stent, to keep the people back and deter them from approaching the cylinder. There was some booing from those more thoughtless and excitable souls to whom a crowd is always an occasion for noise and horse-play.

Stent and Ogilvy, anticipating some possibilities of a collision, had telegraphed from Horsell to the barracks as soon as the Martians emerged, for the help of a company of soldiers to protect these strange creatures from violence. After that they returned to lead that ill-fated advance. The description of their death, as it was seen by the crowd, tallies very closely with my own impressions: the three puffs of green smoke, the deep humming note, and the flashes of flame.

But that crowd of people had a far narrower escape than mine. Only the fact that a hummock of heathery sand intercepted the lower part of the Heat-Ray saved them. Had the elevation of the parabolic mirror been a few yards higher, none could have lived to tell the tale. They saw the flashes, and the men falling, and an invisible hand, as it were, lit the bushes as it hurried towards them through the twilight. Then, with a whistling note that rose above the droning of the pit, the beam swung close over their heads, lighting the tops of the beech-trees that line the road, and splitting the bricks, smashing the windows, firing the window-frames, and bringing down in crumbling ruin a portion of the gable of the house nearest the corner.

In the sudden thud, hiss, and glare of the igniting trees, the panic-stricken crowd seems to have swayed hesitatingly for some moments. Sparks and burning twigs began to fall into the road, and single leaves, like puffs of flame. Hats and dresses caught fire. Then came a crying from the common. There were shrieks and shouts, and suddenly a mounted policeman came galloping through the confusion with his hands clasped over his head, screaming.

"They're coming!" a woman shrieked, and incontinently every one was turning and pushing at those behind, in order to clear their way to Woking again. They must have bolted as blindly as a flock of sheep. Where the road grows narrow and black between the high banks the crowd jammed, and a desperate struggle occurred. All that crowd did not escape; three persons at least, two women and a little boy, were crushed and trampled there, and left to die amid the terror and the darkness.