A Story of the Golden Age 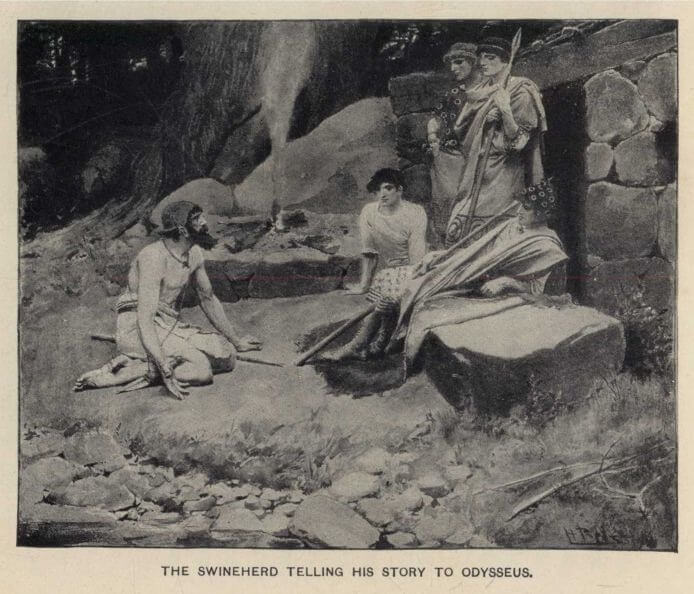 When Odysseus stepped ashore upon the sandy beach of Ithaca, the good people of the town, both young and old, had gathered there to welcome him; and they sang a song of greeting like that with which they were wont to meet their returning heroes. He staid only a moment to speak with them. With winged feet he hastened to the hall where his queenly mother waited for his coming. She threw her arms about him, and in the fulness of her joy wept aloud; and she kissed his head and his eyes and both his hands, and welcomed him as one saved from death.

"Thou hast come at last, Odysseus," she said. "The light is not more sweet to me. I feared that I should never see thee more, when I heard that thou hadst gone from Parnassus to distant Pelion. Come now, and sit before me as of yore, and let me look into those eyes which have been so long time away."

And Laertes, too, folded the boy in his arms, and kissed him, and plied him with a thousand questions which he could not answer. Then, in the halls of the king, a feast was made ready, and the day was given over to music and merry-making; and all the people joined in offering thanks to Pallas Athené, who had brought the wanderer safe home to his friends and his kindred.

When the evening had come, and the guests had gone to their own homes, Odysseus sat upon a low stool at his mother's feet, while she asked him many questions about her aged sire Autolycus, and about the dear home of her girlhood on the farther side of Mount Parnassus. And he told her of all that she asked him, and of the wonderful things that he had seen and heard in far-away lands and seas.

"But were you not afraid that evil would befall you, and that your eyes would never more behold fair Ithaca?" asked his mother, tenderly stroking his yellow hair.

"Nightly I prayed to Pallas Athené," answered the lad, "and she watched kindly over me every hour. Who would be afraid when shielded and led by so great a friend? Then, too, good Phemius questioned the Pythian oracle about me; and the answer was such as to make me sure of safety. It was this:--